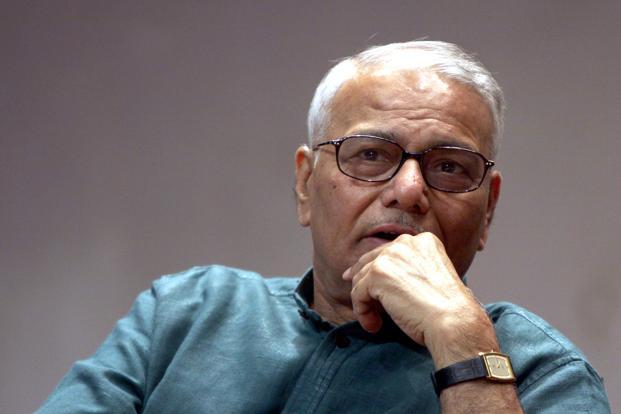 Underlining that the political crisis in Maldives poses a threat to India’s security, senior BJP leader Yashwant Sinha on Sunday urged the government to act immediately and said it should not remain a “mute spectator” with China strengthening its presence in the island nation.

Speaking to reporters at his residence in Uttar Pradesh’s Noida, Mr. Sinha said the Indian government has diplomatic options, non-diplomatic options and it must exercise those in order to ensure India’s security is not threatened amid the crisis in Maldives.

Mr. Sinha, expressing his views on behalf of the Rashtra Manch, a new political platform he launched last month, said that the impression till now has been that “things have been allowed to drift”.

He urged the government to act as it was the “best judge” of the situation and that every hour now was “precious”.

“What’s happening in Maldives is a threat to India’s national security. Highest numbers of people (on per capita basis) from Maldives have joined the ISIS. These people will return to our nearest neighbour (Maldives) when ISIS is wiped out, posing threat to us,” the former External Affairs minister argued.

To a question whether India should consider sending troops to the island country, Mr. Sinha said that it is one of the options. But, he added, that the government should select its option carefully.

The main concern is that time is not lost while India acts, Mr. Sinha said.

“We need not ask any nation before we act. Like in Bangladesh’s case we have seen, if we act, world respects you. But if you don’t, they will take you as weak and you keep taking advice,” he said.

Mr. Sinha said that there were reports that China has already “taken over” 17-18 islands which were part of Maldives and asserted that it was a “matter of most serious concern”.

“That Chinese should come and right under our nose, in our backyard, play these games, India should not remain a mute spectator,” he said.

Mr. Sinha also said that both the present NDA and the previous UPA governments did not act “decisively” when it came to Maldives, which he claimed had become “hostile” to India.

He cited the example of how an Indian company operating at Male airport was “thrown out”.

“We didn’t intervene then too (during UPA regime). So the Maldives government is since feeling that India is finding itself as weak and not acting tough. Hence, it (Maldives) feels it can do what it wants,” Mr. Sinha said.

The island nation, which has seen several political crises since the ouster of its first democratically-elected president Mohamed Nasheed in 2012, plunged into chaos recently when the Supreme Court there ordered the release of nine imprisoned opposition politicians, maintaining that their trials were “politically motivated and flawed”.

India had earlier described as a matter of “concern” the arrests of the chief justice and political figures there.

However, earlier this week, the Supreme Court had revoked its order on the release of the opposition politicians.