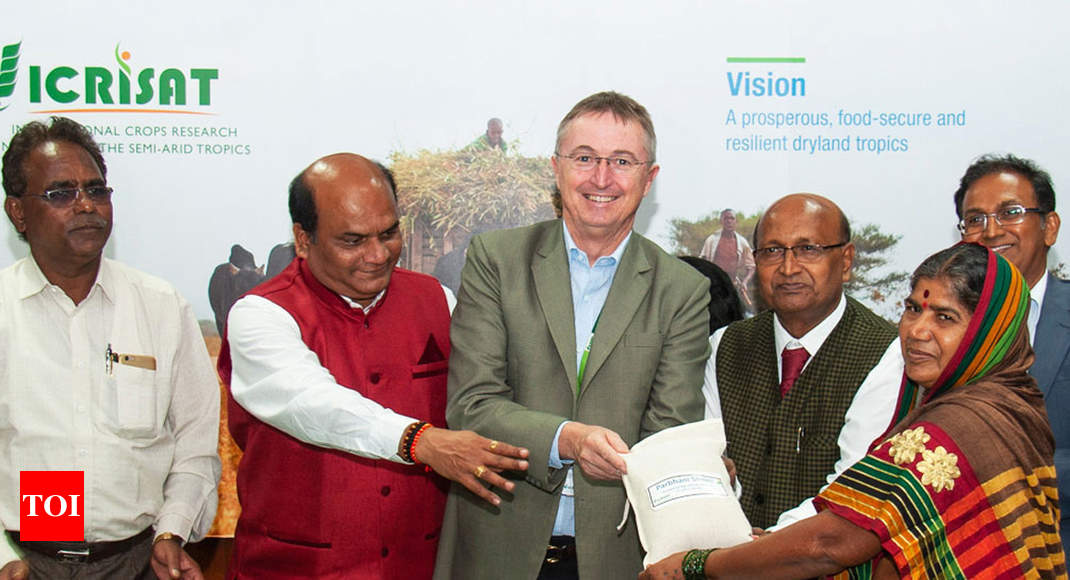 HYDERABAD: India’s first biofortified sorghum (jowar), with significantly higher iron and zinc than regular sorghum, was formally launched on Thursday. Developed by ICRISAT, it was released for cultivation by Vasantrao Naik Marathwada Krishi Vidyapeeth (VNMKV), Maharashtra. The improved variety ICSR 14001, released as ‘Parbhani Shakti’ by VNMKV, offers a cost-effective and sustainable solution to address micronutrient deficiency. An MoU was signed today between ICRISAT and VNMKV for large-scale seed production and dissemination.

Speaking at the programme to celebrate the launch, professor AS Dhawan, vice chancellor, VNMKV said the initiative offers a solution to a major concern like high anaemia rates among women and children in India. Extensive studies on Parbhani Shakti were carried out on our research fields and we are happy to partner in efforts that will have a bigger impact.

Dr Peter Carberry, director general (acting), ICRISAT said, “Our belief statement emphasizes that all people have a right to nutritious food. Biofortification is an important approach we take as it is cost-effective and sustainable. It addresses hidden hunger with no additional cost to its regular consumers and often sorghum is the cheapest cereal available in the market.”

Talking of the many advantages of the new variety, Dr Ashok Kumar, principal scientist, ICRISAT, said Parbhani Shakti developed through several years of work through conventional breeding has an average grain Fe concentration of 45 ppm and Zn 32 ppm. This is considerably higher than varieties that are currently being cultivated in India which have about 30 ppm Fe and 20 ppm Zn. Besides it has higher protein (11.9 per cent) and low phytate content (4.14 mg/100g) compared to 10 per cent protein and 7.0 mg/100g phytates content in most sorghum cultivars. Low-phytate means increased bioavailability of nutrients. “We are very happy that this kind of breakthrough has been achieved in India,” he said.

This improved sorghum variety was developed by ICRISAT under HarvestPlus – sorghum biofortification project and was tested as PVK 1009 in Maharashtra state and in All India Co-ordinated Sorghum Improvement Project (AICSIP) Trials. It was released as a rainy season variety (Kharif) but it can be grown in post-rainy (Rabi) and summer seasons. The yield levels are higher (>5.0 t ha-1) in postrainy and summer seasons with irrigation. When grown in summer season, it can tolerate higher temperatures (41°C) at flowering and seed setting but the flowering may be delayed (80 days).

Farmers Sunanda Shinde and Ahilyabai Shinde from Manoli village, Manvat TQ, Parbhani dist who were part of the participatory field trials said they had got a higher yield of 10-15 per cent and it also has the preferred market traits. “This makes it an attractive option and we are happy we are among the first farmers to use it,” they said.