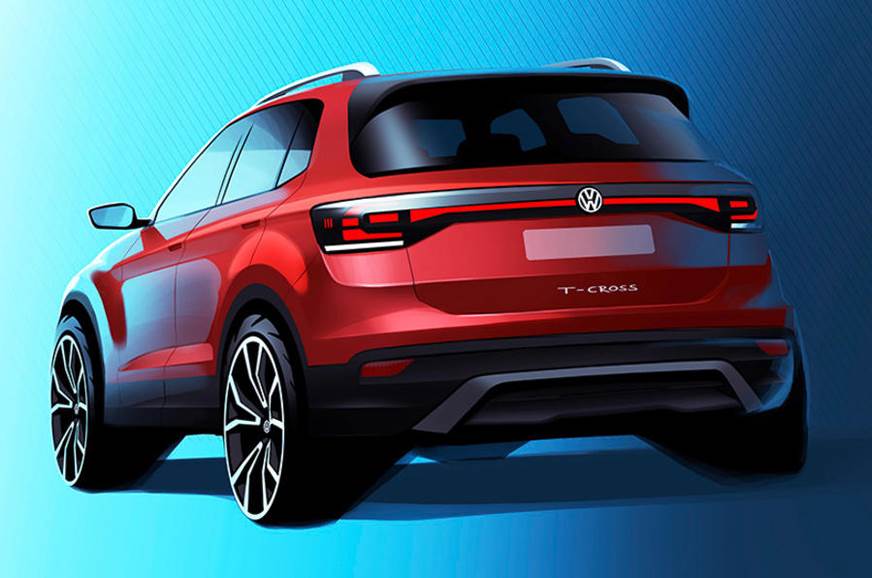 VW’s first SUV to be made or manufactured in India is likely to be a mildly altered version of the T-Cross, an illustration of which has been officially released by VW. Autocar India had previously done a story on VW’s Hyundai’s Creta sized rival back in June 2016, soon after VW had revealed the T-Cross Breeze concept at the 2016 Geneva motor show.

Expected to hit showrooms in India in 2020, the car features an extremely grown-up look for an SUV that measures only 4,107mm in length. The bluff nose has been made to look more imposing by using a chunky chin and the tall wraparound headlights merge seamlessly with the grille. In the past, VW has been criticised for making bland and featureless cars, but here, the large ‘square’ fog lamps really do help the design to stand out and look different.

What Indian car buyers will appreciate is the fact that the design has all its SUV clues down pat. It has an upright SUV-like glasshouse – very important for Indian SUV buyers – prominent wheel arches, a very strong shoulder line and attractively ‘linked’ tail-lights at the rear. The car that we will get in India will not be identical to the ones sold in other markets, but will feature key changes to keep it more in line with Indian tastes.

VW are also likely to hold on their slightly premium price position. Its first Indian-made SUV is likely to be priced somewhere in the region of Rs 12-18 lakh, but the company says it will be very competitive as the car will be loaded to the gills with features, some of them not yet seen in the class in India. Apart from an extremely large touchscreen and advanced telephone and web connectivity, VW says it will give the car sliding rear seats, an extremely high quality cabin and the best safety kit on offer in the market.

But how exactly does Volkswagen plan to keep prices down? For starters, the SUV will be built in India on a heavily localised and lower cost version of VW (and Skoda’s) MQB A0 platform, as reported by us back in March 2018.  Known internally as the MQB A0 IN (for India), the VW Group has already announced a one billion Euro investment (about Rs 7,996 crore) into the Indian market for the same. This will allow it to manufacture or locally source a massive 90 percent of its parts. This will include the 115hp, direct injection, three-cylinder, turbocharged petrol engine, the suspension, axles, driveshafts, a high quality interior  and, of course, the monocoque chassis; stamped locally from Indian made steel.

As of now, VW has no plans to launch a four-wheel-drive version of the SUV and the T-Cross may eventually be renamed for India but one thing’s for sure; this is where VW gets serious about the Indian market. This will be a game changer.