In battle between Congress & MNF, BJP looks to make a dent | INDIA
Categorized as
233
Tagged as
Bru peopleHindutvaMeghalayamizoramNarendra ModiTripura
Related

The contest is between ruling Congress and Mizo National Front. The BJP is also emerging as a force. MNF, though a member of the BJP-floated North East Democratic Alliance (NEDA). has decided to contest the polls on its own.
Shah To Sound Poll Bugle
Soon after its victory in Tripura and installing the government in Nagaland and Meghalaya, the BJP started ground work in Mizoram. Ram Madhav, the BJP general secretary in-charge of North-East, visited Mizoram and took stock of the party’s position. The party is currently setting up booth-level committees and carrying out a membership drive. The party is fighting a campaign that it is anti-Christian and voting for it would be tantamount to bringing Hindutva to the state, which is predominantly Christian. Shah will shortly visit Mizoram to inaugurate a party office and sound the poll bugle. Prime Minister Narendra Modi had visited Mizoram in December last year.

Congress’ Vote Share Rising
Congress, which has been ruling Mizoram since 2008, is refurbishing its organisational set up. The party claims that the ‘New Land Use Policy’ (NLUP) has created several livelihood options. However, anti-incumbency may come to play in the assembly polls. Congress has increased its vote share from 38.89% in 2008 to 44.61% in 2018. Similarly, MNF’s vote share has fallen from 30.65% in 2008 to 28.66% in 2013. Meanwhile, MNF is close to finalising candidates and has unleashed a campaign that the BJP is assisting Congress. They claim BJP and Congress have formed a Chakma Autonomous Council.

Parties may Play Religion Card
The religion card will be extensively played during the election as around 87% of Mizoram’s population comprises pf Christians and the BJP is branded as anti-Christian. Church and civil society-led watchdog group had kept a close watch on the last polls. 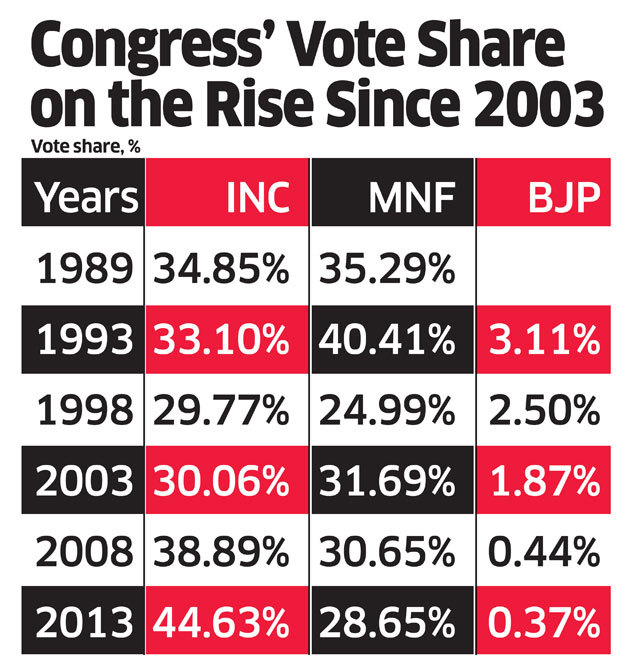 Over 32,000 Bru people have been living in six temporary camps in Tripura. They will be repatriated to Mizoram before September 30 and all camps would be closed by October. Electoral rolls will be revised. Bru Hindus constitute 60% of the refugees in Tripura. Thousands of Bru refuges from Mizoram have been staying in Tripura after the ethnic clashes of 1997.

MNF has been attacking the state government for promoting a liquor culture here. In 2014, after 17 years of prohibition, the Congress government replaced the Mizoram Liquor Total Prohibition Act (MLTP), 1995, defying the powerful Presbyterian church and organisations like the Young Mizo Association (YMA).

Former chief minister Zoramthanga and leader of MNF will play a crucial role. The Congress has accused MNF and BJP of having understanding. Meanwhile, Lalthanhawla continues to be popular but the party is facing the antiincumbency factor. Unlike other states, Mizoram Congress is not divided.