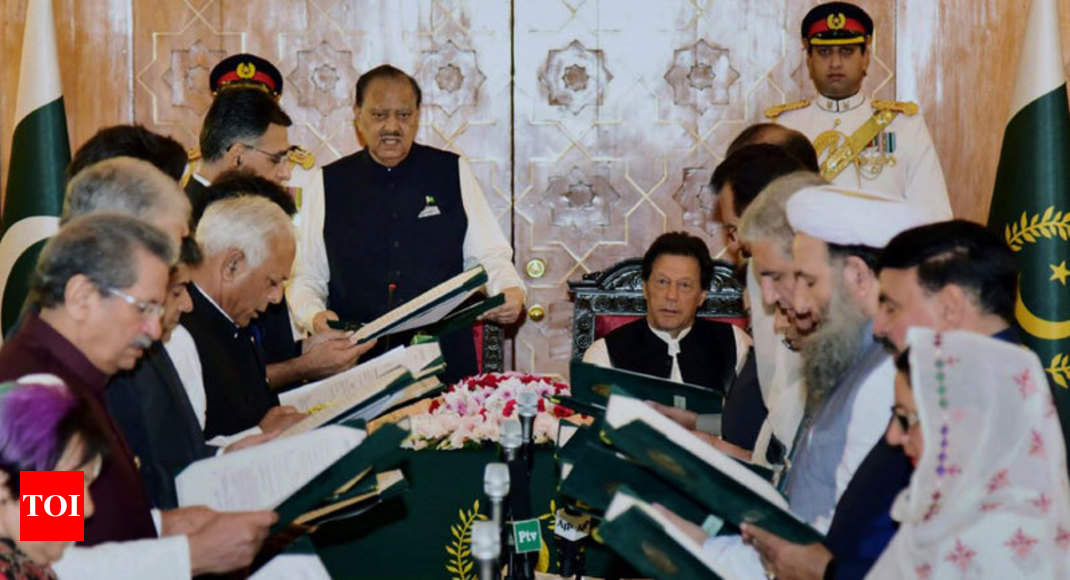 ISLAMABAD: Prime Minister Imran Khan on Monday chaired the first meeting of his Cabinet during which strategies to shape the new Pakistan government’s policies were discussed, hours after the President administered oath to his 21-member team.

Khan, who was sworn-in as Pakistan’s 22nd Prime Minister on Saturday has vowed to initiate massive economic and tax reforms, launch an austerity drive to cut deficit, curb corruption and bring back laundered money.

The 65-year-old cricketer-turned-politician chaired the first meeting of his Cabinet at the Prime Minister’s Office.

Earlier, 16 ministers from Prime Minister Khan’s 21-strong Cabinet were sworn-in by President Mamnoon Hussain, who administered the oath to them.

The new Cabinet has 16 federal ministers and five advisers to the prime minister, most of them previously held key posts in the regime of former dictator General (retd) Pervez Musharraf.

Qureshi, the vice president of the Pakistan Tehreek-e-Insaf party, was the foreign minister from 2008 to 2011 under the Pakistan Peoples Party government when the 2008 Mumbai terror attack took place.

He was in New Delhi when 10 Pakistan-based Lashkar-e-Taiba terrorists attacked India’s financial capital.

Finance Minister Umer is the son of former Lt Gen Mohammad Umer who was part of the Pakistan Army during 1971 war with India.

“We will bring structural changes so that recurrent crises are avoided,” he said.

Defence Minister Khattak said the Cabinet will work 12 hours every day to fulfill the agenda set out by Prime Minister Khan.

“We will bring peace in the country by working day and night,” he said.

Information minister Chaudhry said that major changes will be introduced in state media to make it independent.

Khan, the Chairman of PTI, was administered the oath of office by President Hussain at a simple ceremony in Islamabad on Saturday.

Khan’s government is the third consecutive democratic government in Pakistan since 2008 when Gen Musharraf announced elections after serving as president from 2001 to 2008 following a bloodless coup in 1999.

The PPP formed the government in 2008, followed by the PML-N led by jailed former prime minister Nawaz Sharif in 2013.

Pakistan’s powerful military has ruled the country through various coups for nearly half of the country’s history since independence in 1947.