IDBI Bank Q1 results show how expensive it is for LIC | BUSINESS
Categorized as
158
Tagged as
IDBI Bank favourite guinea pig in Indian financial labkeep IDBI Bank alive.LIC would be the new owner of the lenderLife Insurance Corporation of India (LIC) will soon be IDBI Bank’s owner.Q1 results reinforced this fact.Who needs a bad bank? We have LIC
Related 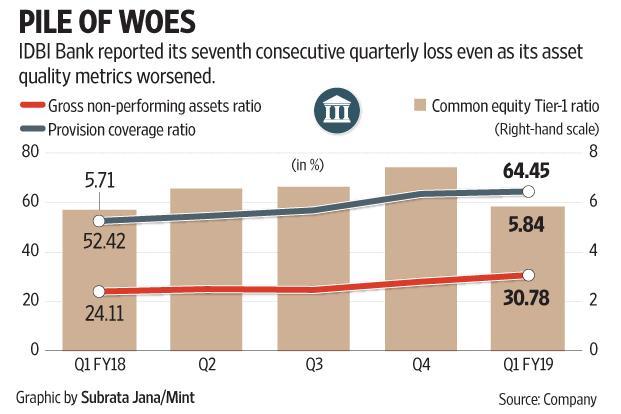 For the IDBI Bank stock, the Q1 results were immaterial ever since it became clear that LIC would be the new owner of the lender.

Quarterly loss? Check. Worst bad loan ratio? Check. Shrinking loan book? Check. IDBI Bank Ltd has all the ingredients to be the weakest lender in the banking system and its Q1 results reinforced this fact. The public sector lender did not make enough money through its banking operations to cover the rate at which it was losing money to toxic borrowers.

IDBI Bank reported a net loss of ₹ 2,410 crore, its seventh consecutive quarterly loss. Its gross bad loan ratio worsened to 30% and even as it kept aside every rupee it made for provisioning, the coverage ratio is 64.45%. Its Tier-1 capital eroded despite a massive infusion from the government last year because the bank needed more to make provisions.

That the lender’s performance metrics will worsen was expected since IDBI Bank was put under prompt corrective action (PCA) in May 2017. PCA is an intensive care unit where the weakest banks are quarantined and told to materially reduce their risky loans. A lot of their activities like branch expansion, credit disbursement and fee business are severely curtailed.

The impact of PCA was visible as IDBI Bank’s loan book shrank further, with corporate loans falling more than 10%. Of course, its retail book grew but by a modest 8%, one of the slowest growth rates among public sector lenders.

So far, it sounds like a stock no one would touch but the country’s largest insurer Life Insurance Corporation of India (LIC) will soon be IDBI Bank’s owner. The lack of wisdom in buying into a bleeding bank has already been pointed out by many.

Indeed, LIC will have to cough up a large sum of capital to keep IDBI Bank alive. In June, the bank saw its common equity Tier-1 capital slip to 5.84% despite the government infusing ₹4,590 crore into it in the previous year.

ALSO READ | Who needs a bad bank? We have LIC

The lender will have to provide ₹1,449 crore towards bond losses in the coming quarters. In addition, there would be provisions due to ageing of bad loans and fresh slippages too. Future capital infusions would flow into these provisioning.

For the IDBI Bank stock though, the Q1 results were immaterial ever since it became clear that LIC would be the new owner of the lender. The stock hardly moved and trades at a discount to its estimate book value for fiscal year 2020.