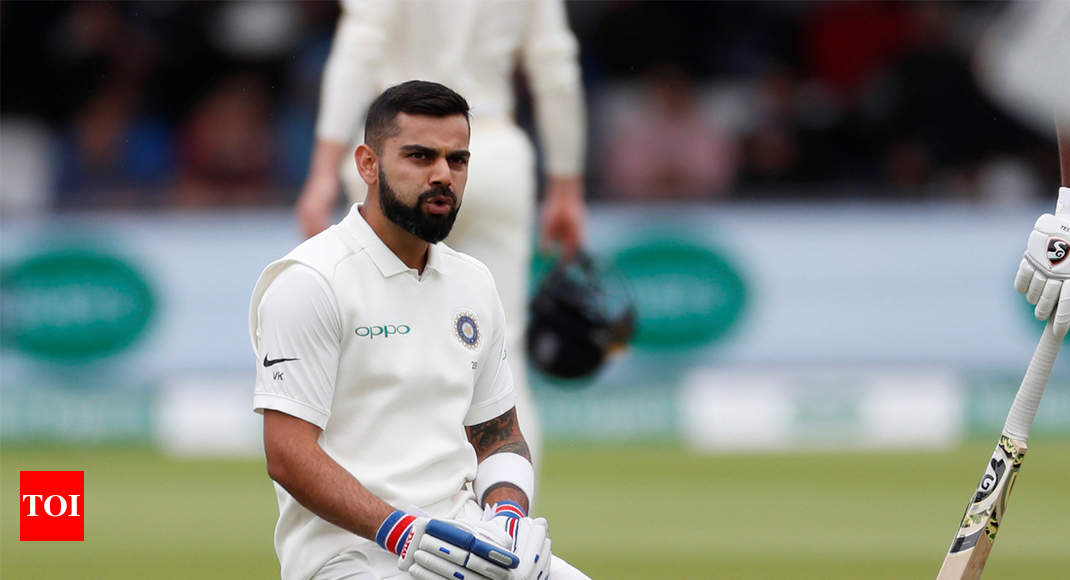 LONDON: India captain Virat Kohli batted with a lower back pain in the second Test against England but is confident of regaining full fitness ahead of the next game starting at Nottingham on August 18.

India lost the second Test by an innings and 159 runs on day four at Lord’s.

READ ALSO: England crush India by an innings and 159 runs at Lord’s

Kohli could score just 17 from 29 deliveries before becoming Stuart Board’s victim in the second innings which folded for 130 in 47 overs.

“It is a lower back issue, coming up again and again, purely because of the workload and the number of matches I have been playing,” Kohli said when asked if he batted with an injury which affected his movement on the crease.

“It’s five days to go. I am confident I will be fine in five days’ time with a bit of rehabilitation. I should be okay,” he said.

Indian batsmen capitulated once again and they were all at sea against the moving ball. James Anderson (4-23) once again toyed with the Indian batsmen, taking his match tally to nine, and equally effective was Stuart Broad (4-44).

“I am not very proud of the way we played to be honest. It is first time in the last five Test matches we’ve been outplayed. But credit to England, they were clinical. When a team plays like that they deserve to be on the winning side. And we deserved to lose,” he said.

Asked if the conditions had favoured the opposition, Kohli said, “We can’t really think about those things. You have to counter the conditions as and when they come to you. Sometimes the rub of the green will go your way too.

“We will not sit around and say that we didn’t have the best of conditions. Their bowlers were relentless with the ball. Looking at things now, the weather was so unpredictable,” he added.

Asked if inclusion of an extra seamer would have been better, he said, “Yeah looking back, I think we got the combination a bit off.”

“Less stressful, definitely. Fantastic from the very first ball. Bowling unit were exceptional throughout the whole game. We probably did have the conditions throughout, but you still have to perform, ask the right questions to the batsman,” Root said.

“To get that far in front, it is testament to the partnership between Jonny and Woakes. I am really pleased for Woaksey (Chris). When you’ve got senior guys like Jimmy and Broad, the others are going to improve.”

Asked about the remaining three matches, Root said, “We are in a really good position to be in at the moment. But we have got to make sure that we don’t take anything for granted.

“Obviously, we have another day now to rest and recover, get our heads around what we’ve done this week. Still areas where we can improve, that’s the exciting part. Chuffed to bits. Pleased for the guys, it is a lot of hard work. Lot of fellas that weren’t getting headlines, but you’ve got to pull together as a team. It’s a great team performance,” he added.