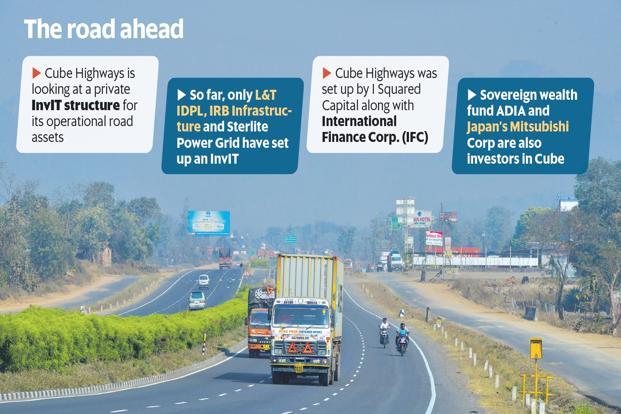 Cube Highways, set up by I Squared Capital and International Finance Corp., currently owns 1,700km of highways in India.

Founded in 2012 by former Morgan Stanley executives, I Squared Capital is an independent global infrastructure investment manager which is focused on energy, utilities and transport in North America, Europe and some high-growth economies. The firm has offices in New York, Houston, London, New Delhi, Hong Kong and Singapore.

In April 2015, I Squared Capital announced the final close of its first infrastructure fund, ISQ Global Infrastructure Fund, at $3 billion.

“I Squared Capital is exploring the option of setting up an InvIT for a bunch of operational road assets that Cube owns. They have been engaging with advisers to understand the viability of the product for their portfolio of road assets. They are looking at a private InvIT structure,” said one of the people cited above, requesting anonymity, as he is not authorised to speak to reporters.

An InvIT will help the infrastructure investor to create liquidity and take some money off the table from its investments in Cube, while also providing a yield product to investors, the second person cited above said, requesting anonymity.

“India is an attractive destination for global investors, who are not only seeking yield, but are keen to invest in independent asset managers such as Cube Highways. There are very few such platforms and thus a Cube Highways InvIT could attract significant interest. After the L&T IDPL InvIT, there is significant interest from issuers in private trust structures,” he added.

Cube Highways was set up by I Squared Capital along with International Finance Corp. (IFC). The platform currently owns and operates over 1,700 lane-km of highways in India across a diverse portfolio of toll and annuity-based roads, as in December 2017.

The platform has already attracted the attention of several investors keen to invest in the Indian infrastructure sector.

CPPIB has invested Canadian about $200 million for 30% of IndInfravit units, while ACP has acquired 25% of the units. L&T IDPL will hold 15% of the units, the company said.

The InvIT consists of five toll roads constructed by L&T IDPL, which are spread across Karnataka, Telangana, Tamil Nadu and Rajasthan.

Another road developer, Oriental Structural Engineers Pvt. Ltd, has been toying with the idea of raising funds through InvIT, Mint had reported last August.