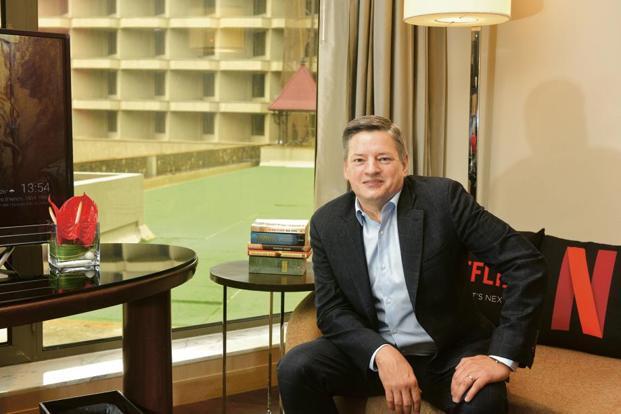 On 6 July, Sacred Games releases on Netflix. Even if this hadn’t been the streaming service’s first original Indian series, expectations would have been high. The eight-episode series has been adapted from Vikram Chandra’s 2006 novel about the decades-spanning battle between a cop and a criminal in Mumbai. The episodes have been directed by Vikramaditya Motwane and Anurag Kashyap, and the cast is headed by Saif Ali Khan, Nawazuddin Siddiqui and Radhika Apte.

Ted Sarandos will be hoping Sacred Games has some of the crossover appeal of international series like Narcos and Dark. As chief content officer at Netflix Inc., which he joined in 2000, Sarandos has helped boost the company to industry-scaling heights by relying not only on Hollywood crowd-pullers (Will Smith, Adam Sandler) and breakout shows like Stranger Things, but by giving talent from across the globe the space to tell their own stories and reach a worldwide audience. A few hours before Netflix announced a new series based on Salman Rushdie’s Midnight’s Children, Sarandos spoke in an interview about Sacred Games, Netflix’s plans for India and its forthcoming collaboration with the Obamas. Edited excerpts:

Why did you pick Vikram Chandra’s novel for your first India series?

It was mostly Erik Barmack and his team who identified it early on as a great property from India. There had been an attempt to develop it for American television a couple of years ago. It was perfect for us, in that we didn’t want to make an American version of it—we wanted to make it very authentic. We believe that fans of crime thrillers will love it, in the US and elsewhere.

I don’t think anyone’s done (original programming in non-English languages) on the scale that we have so far. HBO does original programming in Latin America and other countries, which gets watched in very small numbers in the US, whereas our shows from Germany, from Sweden, Mexico, Brazil and, I believe, from India will get watched in massive numbers across the world.

I think that’s a big draw for talent. People obviously want their work seen and their stories heard, and we have a unique ability to connect them to audiences, not just because we have a big footprint but because our focus is 100% on storytelling. In the US, in India, people come to Netflix to watch great programming, period. So when we give them something great to watch, they show up. The numbers on our foreign language shows in the US would be equal to a cable television hit. La casa de papel from Spain, Dark from Germany, these are totally global shows, and I think Sacred Games is going to be the same for India.

Did you achieve what you set out to with Sacred Games?

Definitely. It was great to hear Vikram (Chandra), the author, talking about how thrilled he was. Usually, writers either don’t like how someone adapts their work or they’re neutral, but he was very, very supportive. So I look at that as the big test, whether it came out as it should have.

Many of your collaborators on the show are part of the Hindi film industry.

It’s been a thrill so far, getting to know the filmmakers and actors. It’s a very tight community, everyone knows each other. What’s been great is how they’ve been open to putting their work into a series, which is a fairly new (format) in India. Understanding the value of having more time to flesh out characters, to tell richer, longer-form stories, is something they’ve been immediately excited about.

This is your first original series in India. Will its reception have a bearing on how you proceed here?

We have a slate of great originals from India. We started with our first film, Love Per Square Foot, and then Lust Stories, and this is our first big series. We have seven projects already announced and several more in the pipeline. So we’re committed to large- scale original production in India.

How has the response been to Lust Stories and Love Per Square Foot? Is original film a direction you’re planning to continue in?

Enormous. Very popular—in India and outside India. And they continue to find audiences through word of mouth. We’d planned to continue with original film programming in India anyway, but the early success of these two films have encouraged us more.

Romantic comedies like Love Per Square Foot, they’re getting harder to release in India because the cost of putting them in theatres is high. Putting the film on Netflix enables you to take all the money you would have spent on advertising and prints and distribution costs and put it on the screen.

Most of Netflix’s forthcoming Indian series are literary adaptations.

I think most movies and TV are based on books, so that’s not unusual. There’s a wealth of unproduced literature in India. Conceptually, it’s helpful to figure out how you’d structure a series from a book—how much ground is covered, how it breaks down—but there’s no mandate.

It’s been over two years for Netflix in India. How would you describe your progress?

So far, I’d say it’s very encouraging. If you look at where we were two years into Brazil or in our other rapid-growth emerging territories, we’re at or ahead of those numbers in India. Our investment in original programming here came faster than anywhere in the world and is bigger than anywhere in the world, so that gives you some indication of how we’re feeling about India.

Do you feel like you have a handle on the sort of programming that works for people here?

Not entirely, but we’re much closer than we were a year ago. I say that because of our subscriber growth, but also because our “minutes of engagement” is growing dramatically as well. So people are very engaged, and more so this year than last year, so it’s steady progress.

You’ve steered clear of sports as a genre, but you’re working on an unscripted series on the IPL team Mumbai Indians and an adaptation of Aravind Adiga’s Selection Day. Is cricket important to Netflix’s plans in India?

The world (of sport) is very popular, that’s why we’re looking at the series, but I don’t think we need sports coverage to crack the Indian consumer. We have sports-adjacent series, like Club de Cuervos in Mexico. Remember, our real brand proposition is about on-demand—watch what you want, whenever you want, however you want. Sports has a very short shelf life. Live television serves that need quite well.

Has viewer eagerness to discover the next big thing made it increasingly difficult to retain viewers for established shows?

Many of our shows launched big second seasons. It’s likely you’ll be in the middle of something else when it comes along. That’s the thing with on-demand television—if you start Breaking Bad, you’re not going to watch anything until you see all of it through five seasons. In the old linear television world, people would be watching four, sometimes five series at a time. Now it’s different, which is very exciting, because I think people are more engaged in the story that they’re watching, so they’re more attached to it. The thing for us is, we don’t need them to watch it at the same time, as long as we watch it eventually.

Have there been any shows lately whose success was especially satisfying for you?

Wild, Wild Country. We’re thrilled at how popular it is in India, but it also played really big everywhere in the world. It’s a fascinating story that was right in front of everybody, but no one ever made it.

What sort of programming are you looking at with Barack and Michelle Obama?

It’s still very early. The idea is they are going to make films and scripted series, not political speech. It’s basically taking their skill set of being great storytellers and bringing it to the screen. It’s early days, we’re still staffing right now.

What are Netflix’s plans for India in the near future?

We’ll look at some unscripted programming, maybe a docuseries. We’ll do more stand-up comedy for sure, it’s been working well for us here. Our commitment to India has been larger and faster than anywhere in the world. Our ability to tap into the tastes of Indian film-lovers and television-lovers—that’s going to determine our success here. The thing we bring to the table that’s different from anyone else is the ability to create real cultural relevance around the world for content from India, and the notion that the next Stranger Things is as likely to come from Mumbai as it is from Hollywood.