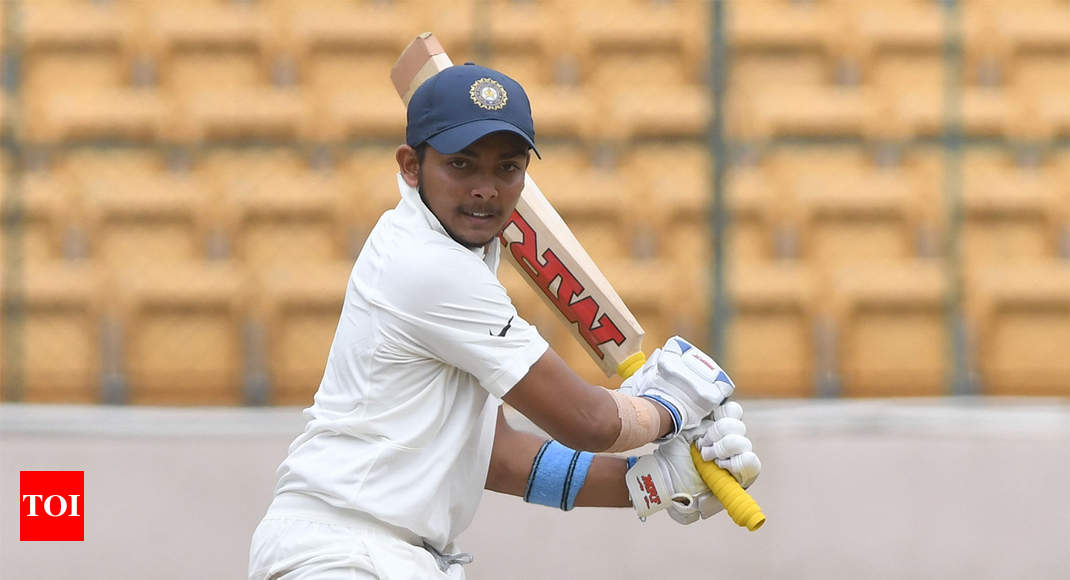 MUMBAI: A major reason for India’s poor show in the ongoing Test series in England has been the failure of all the three openers – Murali Vijay, KL Rahul and Shikhar Dhawan – on the tour so far.

There’s now speculation that in-form openers Mayank Agarwal and Prithvi Shaw, who’ve done well for India A against the A teams of England and South Africa, may get a look-in for the final two Tests of the series.

On Monday, former India all-rounder Ajit Agarkar, who’s currently the Mumbai chief selector, made it clear that Shaw, who’s scored 1418 runs in 14 First-Class games @56.72, with seven hundreds under his belt, was now ready for international cricket. “He’s certainly doing everything right. I haven’t seen him bat in recent times for India A, as those games weren’t televised. But from everything you hear from people, everyone seems to be impressed with the way he’s adjusting. And the sheer amount of runs (he’s scored)… That’s the only way you can push your case. Whether he’s ready for these two Tests at the moment, I’m not sure because I haven’t seen him, but he had a hell of a season for us last year. Someone who’s been around for a couple of years in First Class cricket and scoring as many runs as he is, I can’t see any reason why he isn’t ready (for international cricket),” Agarkar said at the CCI here.

Meanwhile, Agarkar sought to clarify the stance of his selection panel, which has been mired in controversy after Parsee Gymkhana cricket secretary and vice-president Khodadad Yazdegardi submitted over 30 signatures from different clubs to the MCA for the its removal, accusing it of not watching club matches. “There are certain players, who over the last season as well … I mean this comes from the coach … we don’t involve ourselves in practice … have missed practice for various reasons without informing. We had a camp in April-May.

“Those same players have not turned up for the camp without informing us. We wanted to send them a message, and that’s why we didn’t pick them for this off-season camp,” said the 40-year-old, before going on. “But that doesn’t mean that we’ve discarded them for the rest of their lives, as is being said. Those players were always a part of our plans and were added later. I’ve played a little bit of cricket, and I know how much attitude and work ethics matter, because this isn’t an individual sport. This is a team sport. And team dynamics matter. You might be a top player, but eventually if you can’t gel with the 15 other guys, and you’re not adhering to some of the things that the team does, then this message needs to go out.

“And hopefully, it has gone out. And as soon as we got to know the schedule, and the one-dayers came first, those certain players are part of the team, and we’ve picked them,” explained Agarkar.