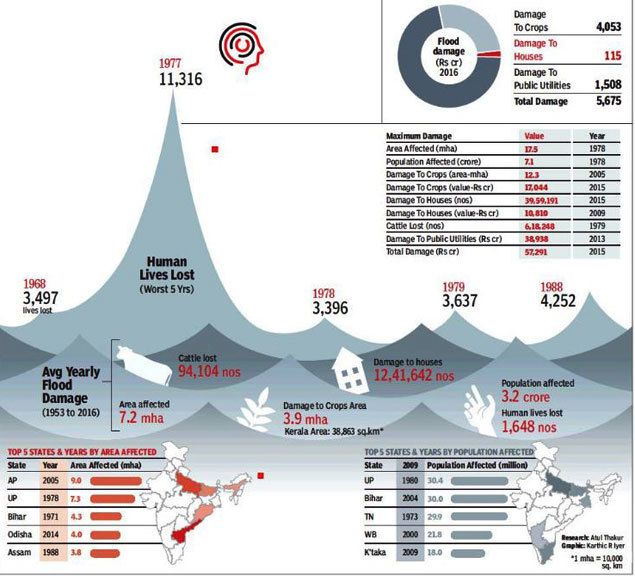 India is among the countries that are most seriously affected by floods. Of its total geographical area of 329 million hectares, more than 40 million hectares is susceptible to floods. Recurrent floods that coincide with monsoon cause huge loss of life, property and crops every year. Here’s a look…
How much damage do floods cause in India?

Central water commission data says that on average annually, floods affect 7.2 million hectares (mha) of land in India , which is equivalent to 72,000 sq.km. Also, more than 3 crore people are affected by such floods, most of them finding themselves temporarily displaced. Over 1,000 human lives and about 1 lakh cattle are lost annually to floods.

Which years were the worst affected?

In terms of loss of life, 1977 saw the deadliest floods as over 11,000 people were killed that year. Floods in 1978 affected over 7 crore people — the highest for any year. Because of the increase in population and unregulated developmental activities, many people have built houses and other permanent structures on floodplains, where floods prove more damaging. In 2015, floods damaged about 40 lakh houses — the highest for any year.

Which states are most vulnerable to floods?

How much is the financial damage from floods?

In 2016, floods caused total damage of over Rs 5,000 crore. Of this, an overwhelming proportion was damage to crops.