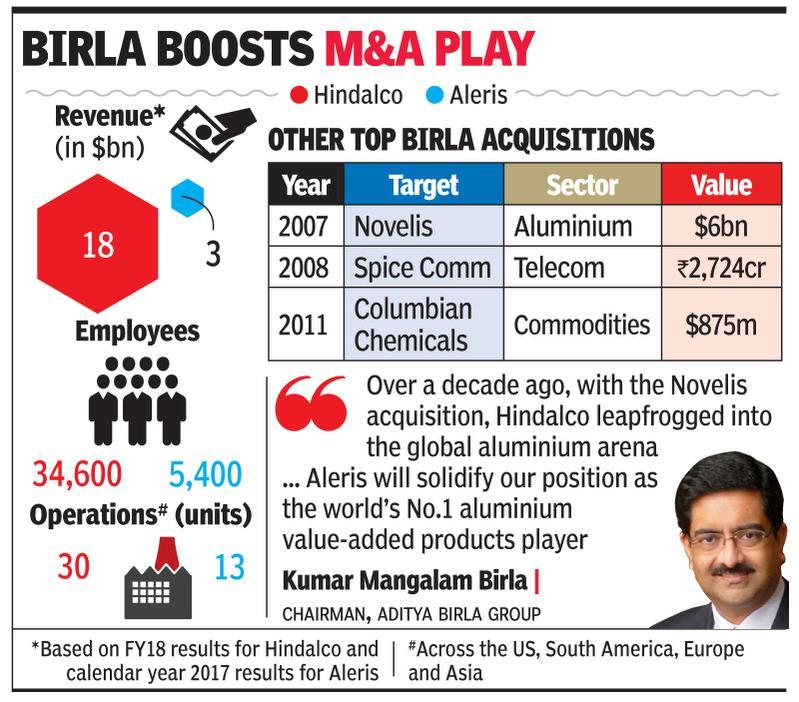 MUMBAI: Hindalco, the metals flagship of the Aditya Birla Group, has agreed to acquire the US-based Aleris for $2.6 billion, solidifying its position as one of the largest aluminium players in the world.

The company will acquire Aleris through its American outfit Novelis in a debt-financed deal. The transaction will make Hindalco a $21-billion entity in terms of revenues, with an employee base of 40,000.

Aleris will be Hindalco’s second acquisition in the US after Novelis, which it had bought for $6 billion in 2007. Hindalco’s purchase of Novelis was the second biggest overseas deal by an Indian entity after Tata Steel’s $13 billion acquisition of Corus. The Aleris transaction, subject to approval from regulators including antitrust agencies, is expected to be closed within 15 months. The Aditya Birla Group doesn’t see any obstacles in getting antitrust clearances, but sees a “political risk” to the Aleris buyout.

Before Hindalco struck a deal for Aleris, its private equity owners Oaktree Capital, Apollo and Sankaty Advisors had entered into a pact with Chinese aluminium billionaire Liu Zhongtain for $2.3 billion in 2016. But the transaction failed to materialise after it got caught in regulatory crosshairs following criticisms that a Chinese connection could compromise proprietary technology used by US defence services. Aleris makes materials that are used in American battle tanks and armoured vehicles.

However, the Aditya Birla Group hopes to succeed in getting all clearances for the Aleris buyout. “We don’t see any reason why we won’t get a clearance in the US, given the presence Novelis has in the US combined with our parent company in India,” Novelis chief executive Steve Fisher said.

Aleris gives Hindalco a foothold in the aerospace segment through its technological, research and manufacturing capabilities in Germany and China. Aerospace accounts for 14% of Aleris’ revenue of $3 billion.

Novelis will pay $775 million for equity in Aleris and will take over its $1.8 billion of debt on its books. Besides Germany and China, Aleris has 11 manufacturing facilities in the world with nine of them located in America. Aditya Birla Group chairman Kumar Mangalam Birla said, “The acquisition diversifies Hindalco’s product mix in the value-added segment, which has higher margins and is less volatile to aluminium prices.”

Besides aerospace, Aleris gives Hindalco an entry into the construction market, while strengthening its presence in the automotive sector. Aleris will add another $2.6 billion to Hindalco’s current debt of $3.5 billion. The transaction is being advised by Goldman Sachs and Moelis.