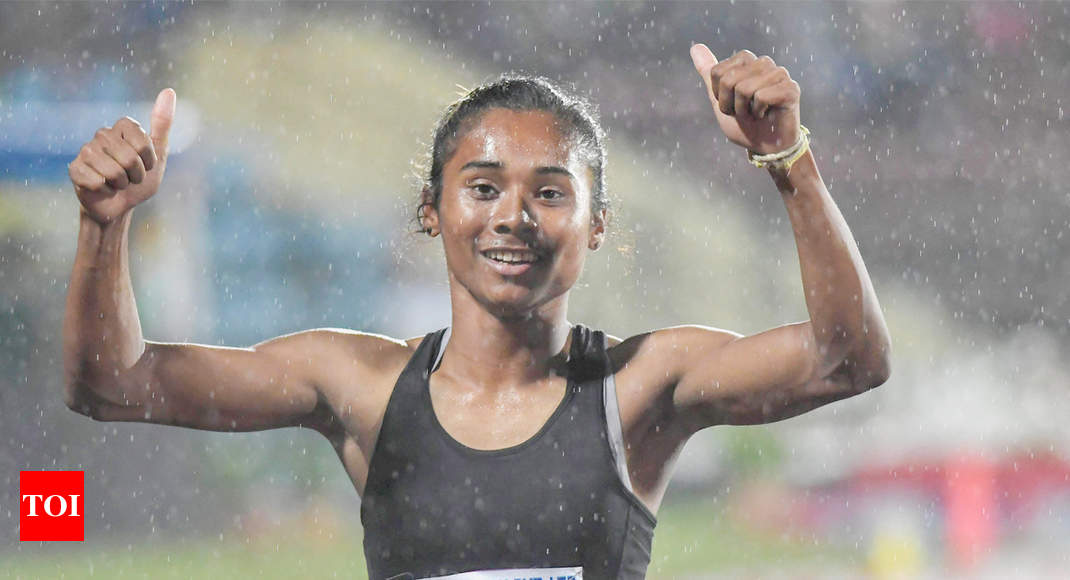 NEW DELHI: Top Indian quartermiler Hima Das will lead a 31-member athletics team at the IAAF U-20 World Junior Championships to be held at Tampere, Finland from July 10 to 15.

The 18-year-old Das, who has also been named in the Asian Games team, is a medal contender in the flagship junior event of the IAAF. She has been going from strength to strength ever since she first broke into the national scene with a pair of medals at the Indian U-18 Youth Nationals in February.

Das has emerged as the fastest athlete in 200 and 400m in India. The athlete from Dhing village in Assam finished a creditable sixth in 400m event at Commonwealth Games in April. She is in red hot form heading into the competition in Finland, having won the 400m gold at the Inter State Senior Athletics Championships in Guwahati last month.

Her winning time of 51.13 seconds makes her one of the favourites for the Junior Worlds with only one other athlete — USA’s Sydney McLaughlin — having recorded a faster time this year.

Das is not the only athlete who will be expecting to compete for medals at the World Championships. Among men, junior national record holder M Sreeshankar would be hoping to finish on the podium. The Kerala long jumper’s personal best of 7.99m set at the Federation Cup in March is the fourth best by a junior athlete this year. He won a bronze at the Asian Junior Championships in Japan last month with an effort of 7.47m.

Sreeshankar will have company in Tampere in Satyanathan Lokesh who has also been named in the squad. Lokesh goes into the competition in 11th rank among junior athletes with a season best of 7.74m recorded at the South Asian Junior Championships in May.

Also looking to carry on some form from the Asian Junior Championships will be the hammer throw pair of Ashish Jhakar and Damneet Singh who took first and second places at Gifu last month. Jhakhar’s throw of 76.86m places him at sixth among junior athletes this season while Singh’s season best of 74.08 places him at 11th.

Singh would be carrying a bit of confidence of competing and winning at the international level, having clinched a silver at the World Youth Championships in Nairobi last year.

Competing under a bit of pressure will be javelin thrower Sahil Silwal. The 18-year-old has big shoes to fill. He will be looking to emulate senior compatriot Neeraj Chopra, who at the 2016 edition of the tournament in Bydgoszcz, Poland, set a junior world record with a throw of 86.48m to become the first Indian to win a gold at an IAAF world event.

Silwal’s best is 74.88m that he recorded last month in Finland. The mark places him fifth among junior javelin throwers.

Heading into the competition with full of confidence will be middle distance runner Beant Singh. Marked out for success at an early age following a silver medal in the 800m at the Open Nationals in 2014 and then a gold at the Asian Youth Championships the following year, Beant suffered a series of injuries that caused his career to falter.

An exit in the heats at the 2016 Junior World Championships in a sub-par time of 1:51.73 was a particular low point. The Haryana athlete though has found some momentum going, clocking 1:46.92 in a fourth-place finish at last month’s Inter State Championships. That timing is the seventh fastest among junior athletes this year.