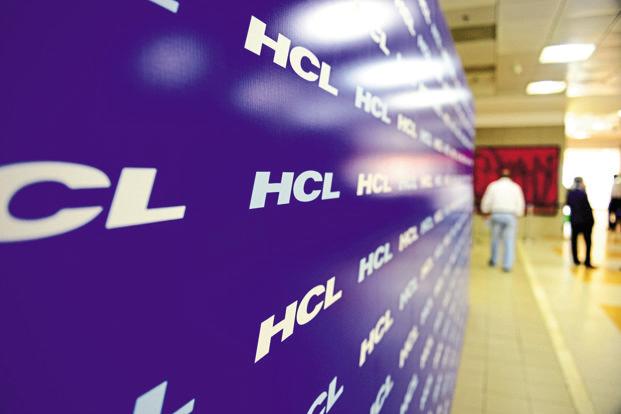 Since 1 April, HCL Technologies shares are down 5.21% even as BSE IT index has gained 14.34% while BSE Sensex has returned 6.82%. Photo: Ramesh Pathania/Mint

Bengaluru: HCL Technologies Ltd’s investors remain nonplussed. Since 1 April till date, shares of HCL Technologies are down 5.21% even as BSE IT index has gained 14.34% while benchmark BSE Sensex has returned 6.82%.

This despite Noida-based HCL Technologies poised to surpass Wipro Ltd to become India’s third-biggest software services provider in the three months to 30 June, marking the first change in the pecking order of the country’s $167 billion information technology (IT) outsourcing industry in six years. 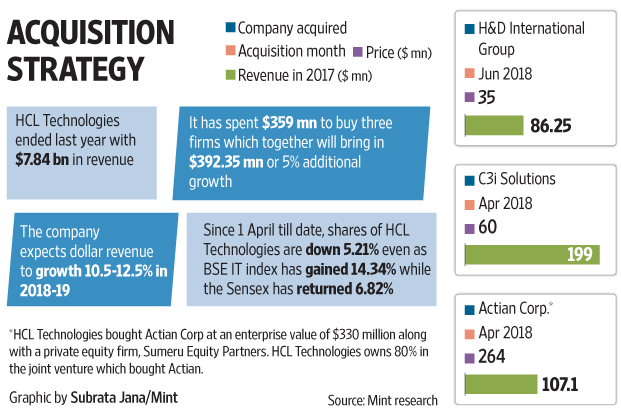 Again, shareholders of billionaire Shiv Nadar-led HCL Technologies appear to have ignored its management’s industry-leading growth outlook. HCL expects to grow its dollar revenue between 10.5% and 12.5% in 2018-19, higher than Infosys’s at-best 9% in the current year.

Firstly, HCL Technologies, which ended with $7.84 billion in revenue last year, is buying growth even as growth in its traditional solution offering business is slowing.

On Wednesday, HCL Technologies said it will spend $35 million to buy a German IT and engineering services provider, H&D International Group, making it the third acquisition in as many months.

Since April, HCL has spent $359 million to buy three companies which together will bring $392.35 million in incremental revenue or 5% additional growth, according to a Mint analysis. These include $60 million to buy US-based C3i Solutions and $264 million to buy Actian Corp., a Palo Alto-based data analytics firm.

“Management has guided for 9.5-11.5% constant currency growth for FY19E (10.5-12.5% in dollar terms). However, inorganic growth accounts for nearly half of this, implying organic growth of only 4.25-6.25%…We factor 5% in FY19E due to concerns on infrastructure services,” Jefferies analysts Arya Sen and Ranjeet Jaiswal wrote in a note, dated 19 June.

HCL’s acquisition strategy appears to be an extension of the company’s questionable approach of spending $1.1 billion in licensing intellectual properties (IPs) from companies and then building products around them for clients. Mint at the start of the year first did an analysis of HCL’s risky bets in acquiring some of decade-old IPs, such as International Business Machines Corp.’s (IBM’s) Lotus Notes.

“Does anyone, other than HCL, see any logic in buying H&D or C3i Solutions? It is not that Indian companies are noting investing in digital—Infosys bought Brilliant Basics and Wongdoody and Wipro bought Appirio and Designit,” said a Mumbai-based analyst at a domestic brokerage, on the condition of anonymity.

Finally, analysts continue to remain unimpressed with the management’s approach to make the company future-proof. HCL claims it is investing in digital, the fuzzy umbrella term which each company uses to classify revenue generated from areas generally classified as social, mobile, analytics, cloud computing and Internet of Things.