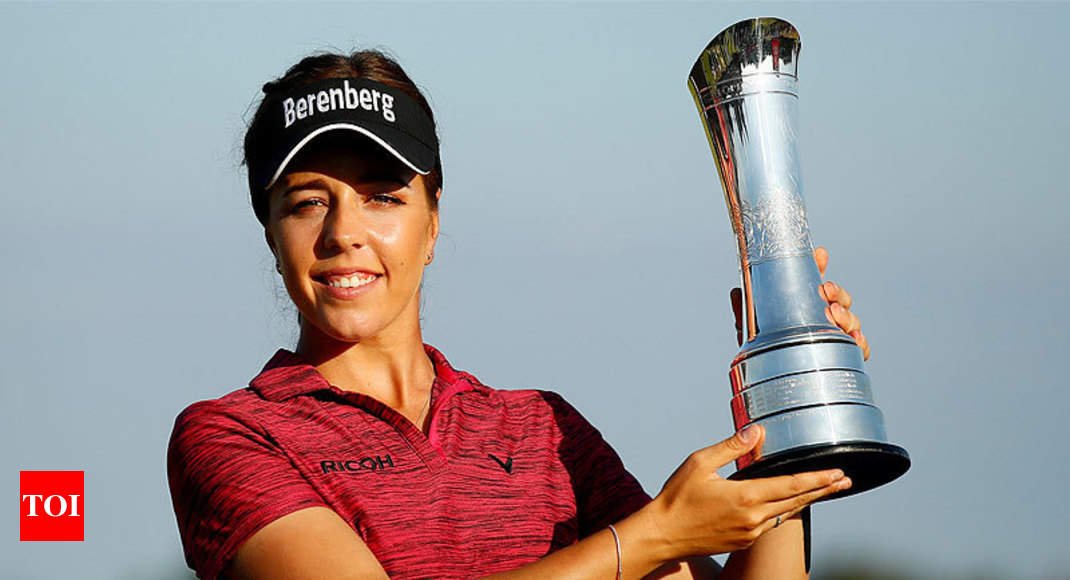 LYTHAM ST ANNES: England’s Georgia Hall used to imagine as a young girl she was putting to win the British Open — on Sunday that fantasy became a reality as she showed grit and a steely nerve to win her first major at Royal Lytham and St Annes.

With her father Wayne acting as her caddie, the 22-year-old came from a shot behind overnight leader Pornanong Phatlum of Thailand to fire a sublime final round of five-under 67 for a 17 under par total and claim a first major title and the $490,000 winner’s cheque.

Over the 72 holes, Hall made only three bogeys — she could well afford the one at the last — and her six-birdie final round secured a two-shot victory over Pornanong.

“This is too good to be true,” she said.

“When I was nine years old I used to say ‘this for the British Open’ and to have that experience today was just unbelievable.”

It was also an emotional win as her grandfather is not well.

Struggling to hold back the tears at the presentation, she said: “This is for you Grandad.”

Hall, whose first name is in honour of the American state that hosts the Masters at Augusta, had only won twice previously since turning professional in 2014, as a rookie on the Ladies European Tour Access Series and at the 2016 Victorian Open in Australia.

The final day turned out to be a two horse race between the pair at the back of the field, Hall and Pornanong.

The Thai 28-year-old was two ahead after four birdies in the first six holes and still one ahead at the turn.

But Hall staged a great back nine charge with three birdies in four holes from the 13th, the 25-footer at the 16th earning the lead for the first time.

Hall is the first British winner since Scotland’s Catriona Matthew, also at Lytham in 2009, and joins Laura Davies, who has four, Alison Nicholas (1997 US Women’s Open) and Karen Stupples (2004 British Open) as English winners of a women’s major.

“It was almost like matchplay at the end, and I enjoy that sort of golf,” said Hall.

“I played in the Solheim Cup (Europe v the USA) and loved it.

“Being able to hit these shots under pressure felt so good and to have six birdies in the final round of a major isn’t bad is it?

“It’s wonderful to join the list of British major winners.”

Hall said that being in contention for last year’s title had stood her in good stead for Sunday’s climax.

“I was nervous, but in control. I just loved every minute.”

Pornanong, leader at halfway and after 54 holes, did little wrong, but was finally overtaken by Hall’s late great run and only then started making costly errors.

A double-bogey at the 17th finally ended her challenge.

Pornanong closed with a 70 for 15 under par with South Korea’s Ryu So-yeon in third place on 13 under after a 70 that was blighted by a triple-bogey seven at the third.

Hall was able to enjoy the walk down the 18th — by then she had a three-shot lead and she played for a safe bogey.

Atthaya Thitikul was the only amateur to make the cut, and her reward was to win the Smyth Salver.