NEW DELHI: With a strategic sale of public sector companies such as Air India (AI), Hindustan Copper and Mecon off the table until next summer’s general elections, the government is eyeing state-run players in the power sector to replicate the ONGC-HPCL model to buy out its stake and also contribute to the “disinvestment” kitty.

While discussions have begun, the list of companies is yet to be finalised with Satluj Jal Vikas Nigam (SJVNL) seen as a possible candidate, a source told TOI. One option is to get NHPC to acquire the Centre’s 63.8 per cent in SJVNL, a joint venture with the Himachal Pradesh government, an official said. 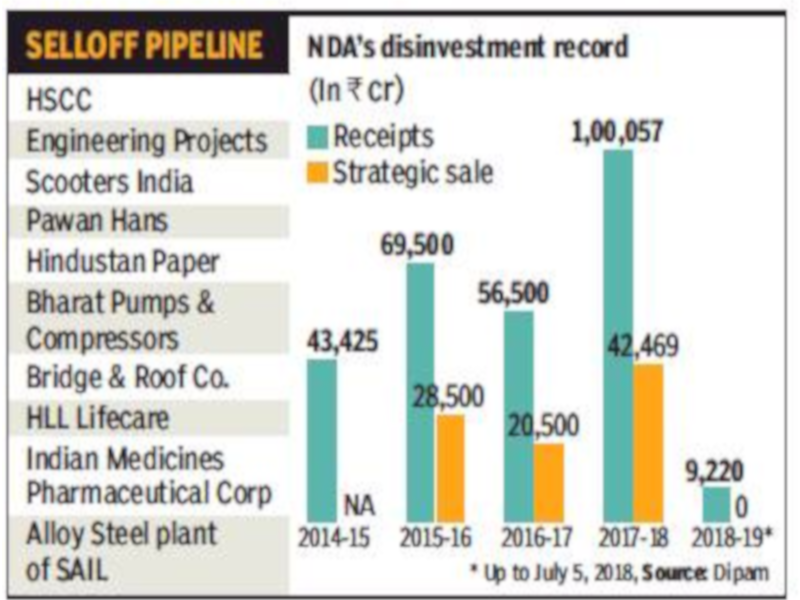 But others reckon that it may not be the best choice as the NHPC management is seen to be laid back. Instead they find NTPC a better bet given that it has a team that is focused on hydel energy. At the same time, the Himachal Pradesh government’s shareholding does not make it an automatic choice for the sell-off experiment. The discussions come at a time when the government has garnered a little over Rs 9,000 crore of its disinvestment target of Rs 80,000 crore for the financial year and is hoping to replicate last year’s experience of mopping up a record Rs 1 lakh crore, which was aided by the Rs 37,000 crore that came from ONGC’s acquisition of the Centre’s majority stake in oil marketing firm Hindustan Petroleum (HPCL).

While close to a dozen public sector companies, mainly loss-making ones, is in the queue for divestment, over the next few weeks, construction player NBCC is expected to acquire Hospital Services Consultancy and Engineering Projects (India), where it has emerged the highest bidder in a marriage that was arranged by the government.

NBCC, which has bagged several high-profile government projects, plans to run the companies as wholly owned subsidiaries for the time being, and it does not see the need to get rid of manpower. “In fact, the companies may need people,” said a source, adding that the NBCC is hoping to turn the two ailing entities profitable over the next couple of years.

The government’s rush towards the power sector comes as it seeks to meet the year’s divestment target at a time when there is pressure on revenue and there is little scope to pare spending.