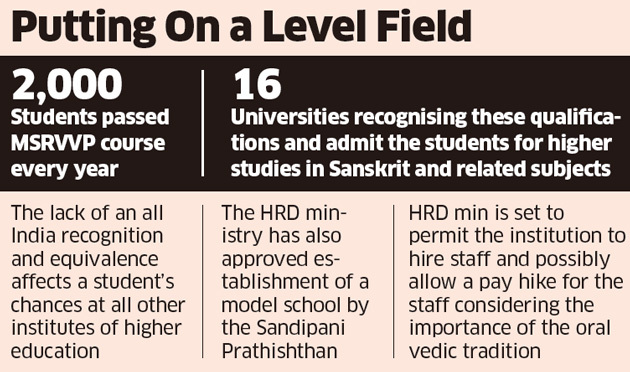 NEW DELHI: While the Modi government could not set up a separate Gurukul Board of education as was originally proposed by many influential quarters, the Human Resource Development (HRD) ministry is closely examining the possibility of granting an all-India ‘recognition’ or school board/CBSE board-level equivalence to Vedic certifications.
The government is considering a proposal by the Ujjain-based “Maharshi Sandipani Rashtriya Veda Vidya Pratishthan” for class 10 and class 12-level equivalence for its Ved Bhushan and Ved Vibhushan qualifications, sources told ET.

The Pratishtan—an autonomous body under the HRD ministry—admits students from Class 5 onwards. While the Ved Bhushan is granted after five years of study, a student earns the Ved Vibhushan after seven years of study.

The move comes two months after the RSS-affiliated Bharat Shikshan Manch (BSM) held an international ‘Virat Gurukul Sammelan’ at the MSRVVP Ujjain campus and called on states to set up individual Gurukul boards. MSRVVP is central to the BMS plans as it wants to institute to act as the nodal body to help ensure equivalence of Vedic education to mainstream education systems.

Sources in the HRD ministry told ET that the request is under active consideration and CBSE’s views on the same have been sought to be able to move ahead.

CBSE officials confirmed to ET that a view will soon be taken on the matter keeping in mind existing policies and equivalence norms by the Association of Indian Universities.

The Ujjain-based institute has been pointing out that students passing out often face difficulties in admissions for higher education as the Ved Bhushan and Ved Vibhushan are not well known or recognized by any board.

There are technical concerns though since MSRVVP is not affiliated to any school board presently, making equivalence difficult. Earlier under the UPA regime equivalence was granted to madrasa certificates with CBSE but state board affiliation and the Association of Indian Universities was brought into the picture. CBSE sources indicated that the AIU route may also apply here.

A senior MSRVVP functionary, however, pointed out that the Ved Bhushan and Ved Vibhushan were completely in keeping with the education policy of Iindia which prescribes a 10+2 system.