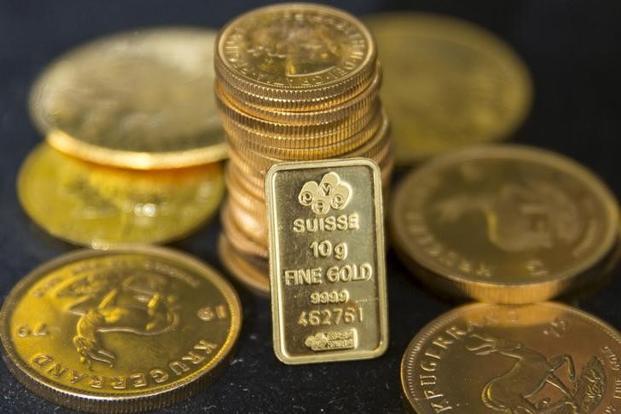 New Delhi: Gold prices rebounded by Rs 170 to Rs 30,420 per 10 grams today amid fresh demand from local jewellers and positive global sentiment , reported PTI. In global markets, gold rates inched up as demand for the yellow metal rose after prices slumped to a 19-month low last week, while a rising dollar weighed on the market ahead of planned US-China trade talks. In Delhi, gold prices of 99.9% and 99.5% purity rose by Rs 170 each to Rs 30,420 and Rs 30,270 per 10 grams, respectively. The precious metal shed Rs 90 in Saturday’s trade. Sovereign gold remained flat at Rs 24,400 per piece of eight grams.

Following gold, silver prices edged higher by Rs 100 to Rs 38,100 per kg due to increased offtake from industrial units and coin makers, added the report. Silver coins, however, continued trade at previous level of Rs 72,000 for buying and Rs 73,000 for selling of 100 pieces.

The Indian rupee today along with Asian currencies strengthened against the US dollar over optimism that trade tensions between US and China will ease after planned talks due this week. The home currency opened at 69.83 a dollar. At 3 pm, the rupee traded at 69.7, up 0.65% from its previous close. So far this year, the rupee has weakened 9%, while foreign investors have sold $193.30 million and $5.35 billion in equity and debt markets, respectively.

Global gold prices have declined over 13% from its April high on rising US interest rates and a soaring dollar. However, the rise in dollar slowed ahead of trade talks between US and Chinese officials set to take place this week. The dollar index against a basket of six currencies was up 0.2% on Monday, after hitting its highest since June 2017 last week and posting its worst decline in nearly a month on Friday.