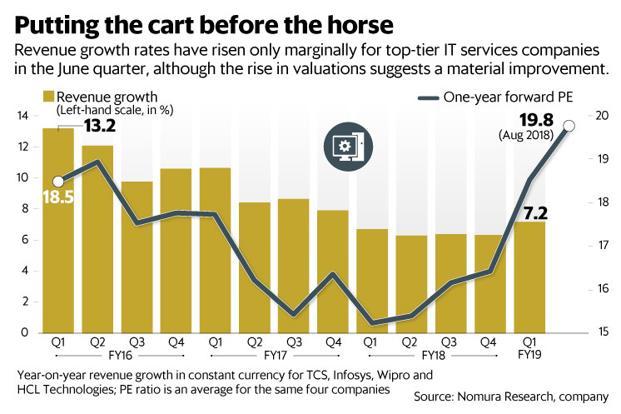 About a year ago, India’s top four IT services companies traded at an average valuation of around 15 times one-year forward earnings. Currently, their valuations have risen by about a third to over 20 times forward earnings.

Have growth rates at these companies improved materially? Not really. Only Tata Consultancy Services (TCS) Ltd has reported a meaningful recovery in growth in the June quarter. Compared to revenue growth of 6.7% in the previous financial year, TCS reported growth of 9.3% last quarter.

None of the other top-tier companies—Infosys Ltd, HCL Technologies Ltd and Wipro Ltd—reported a year-on-year acceleration in growth rates. For the four companies together, growth merely inched up from around 6.4% in the previous year to 7.2% last quarter, data collated by Nomura Research shows.

“Revenue growth saw a slight uptick in Q1 led by TCS. We are cautious on the possibility of material acceleration in financial year 2018-19,” analysts at Nomura said in a note to clients. Of course, the sharp depreciation in the rupee has been a factor that has got some investors excited, although it must be noted that this alone can’t warrant the large re-rating in IT stocks.

IT stocks have also benefited from increased allocations to the sector by domestic mutual funds.

Inflows to these funds have continued to be strong and the dearth of quality stocks in the market has forced some funds to consider increased allocations to Indian IT.

The upshot, of course, is that valuations have risen beyond what growth rates warrant. Even in TCS’s case, valuations are at nearly 25 times forward earnings, far ahead of where earnings growth is expected to be.

What about future growth prospects? Perhaps, the improvement in TCS’s growth points to acceleration in growth rates for all companies going ahead. After all, nearly all companies had an optimistic view of the future, bolstered by impressive announcements on deal wins and bookings.

But these statements should be taken with a pinch of salt. “Is the bookings number an indicator for material acceleration in growth ahead? We think the answer is not straightforward and depends on the extent of leakages in traditional business, defence of share against consolidation decisions and new wins. Order bookings portray only a part of the picture. Finally, the definition of revenues is standard, for bookings it is not,” analysts at Kotak Institutional Equities wrote in a recent note to clients.

In other words, if companies are losing revenues from existing clients at a faster pace compared to what new deal wins will bring in, there is no point in investors getting excited just based on the booking number.

It’s best, then, for investors to focus on traditional measures such as revenues and profitability.

Leaving TCS aside, most other large companies seem to be still struggling to increase growth rates.

Of course, some mid-sized companies have done far better than the larger companies. Even so, it’s foolhardy to paint everyone with the same brush. Besides, profit margins of the top four has narrowed by about 200 basis points in the past three years, and that is despite a steady depreciation in the rupee. As such, gains from a weaker rupee may not be as high as some investors are hoping for.

In sum, while a re-rating of IT stocks may be in order, it should only apply to the companies where hopes of a turnaround are reflected, to some extent, in the financials.