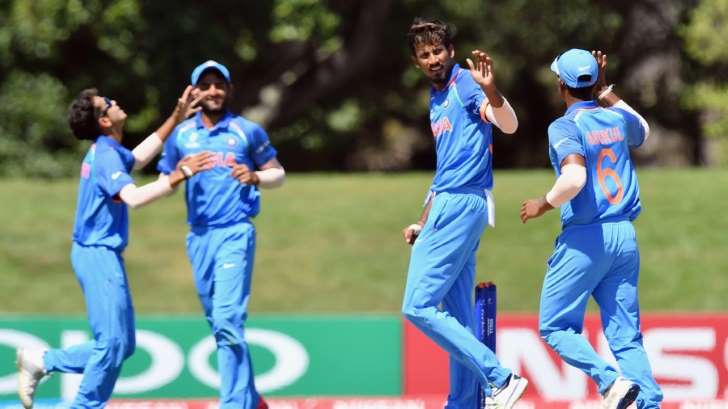 Shubman Gill converted his record sixth fifty-plus score in Youth ODIs into a magnificent backs-to-the wall century to help India stroll into Saturday’s final against Australia in Mount Maunganui. He was helped in no small part by Shivam Mavi and Prithvi Shaw, who pulled off outstanding catches at fine leg and slip respectively early in Pakistan’s chase of 273 to cause a stir they couldn’t quite recover from.

From 20 for 3, overcoming a relentless pace battery and a spin troika proved a task too steep for Pakistan. Ishan Porel, India’s third seamer, walked away with a commendable four-wicket haul as Pakistan were bowled out for 69 in 29.2 overs, their lowest in the tournament’s history.

Where Pakistan were lax, reprieving Manjot Kalra thrice and Shaw once early in the innings, India were the diametric opposite. Mavi, who delivered three successive maiden overs in Pakistan’s chase, threw the ball back in at fine leg after he was slightly overbalanced to complete a stunning catch on the rebound to dismiss Muhammad Zaid Alam. Two overs later, Shaw anticipated the edge and moved to his left to take a sharp catch at wide slip. That left Pakistan at 13 for 2. It demanded a period of caution that soon escalated into serious pressure, eventually leaving Pakistan having to play catch up.

Pakistan’s fielding was also partly why India got the start they did. The openers put on 89 in 15.3 overs, but it could have been all too different had Pakistan not let opportunities slip. It started in the eighth over when Shaheen Afridi missed a run out at the bowler’s end with Shaw struggling to complete a run. Off the next delivery, he should have had Kalra nicking to slip, only to see Alam put down a sitter.

Pakistan’s fielding was also partly why India got the start they did. The openers put on 89 in 15.3 overs, but it could have been all too different had Pakistan not let opportunities slip. It started in the eighth over when Shaheen Afridi missed a run out at the bowler’s end with Shaw struggling to complete a run. Off the next delivery, he should have had Kalra nicking to slip, only to see Alam put down a sitter.

Before all that though, Kalra exhibited a touch of class in driving on the up and trusting his hand-eye coordination over feet movement. He impressed with his crisp off-side play, based on the old principle of ‘stand and deliver’ to loft Arshad Iqbal over the infield and then following it up with a scorcher of a cover drive. A third boundary that came off the free-hit set the tone for India’s early dominance. The calculated assault was reminiscent of the kind Virender Sehwag inflicted on Pakistan at the 2011 World Cup semi-final.

Then came the slide as Pakistan broke a threatening opening stand when Muhammad Musa brilliantly ran out Shaw in the 16th over. Shortly after, Kalra nicked off to the wicketkeeper to leave India 94 for 2. India had Gill, coming off three successive half-centuries in the tournament, and his calmness helped steer forward until they hit another road bump.

The slide was triggered by Iqbal who first had Harvik Desai slashing a short ball to point. Riyan Parag nicked a length ball to the wicketkeeper and Abhishek Sharma was dismissed down the leg side. India slipped from 148 for 2 to 166 for 5, in need of a lower-order rally.

Gill’s calm and Anukul Roy’s industry proved to be an ideal combination, the pair intent on taking the innings past the 40th over. Along the way, they put on a 67-run sixth-wicket stand. Roy showed more than glimpses of his batting abilities, displaying swift feet movement to loft over the bowler’s head and over cover against the spinners. Against the fast bowlers, he was happy to hang back and play the pull, the two swats through midwicket a reflection of his range.

This allowed Gill the luxury of looking to bat through, but when Roy gloved a pull to the wicketkeeper, he had to take it upon him to deliver the finishing touches. This passage also coincided with him nearing a century and could’ve proved to be tricky. But Gill didn’t let that influence his shot selection, continuing to swing his way towards the end overs.

Forty-two of Gill’s 102 came in the last 10 overs in a passage that provided a wild momentum swing for India. Pakistan just switched off briefly towards the back end and saw India wallop 75 in this period. Where 240 could’ve kept them in the game, Pakistan found themselves chasing 273.

Then they ran into Porel. Not in the same league as Kamlesh Nagarkoti or Mavi in terms of pace, Porel relies on bounce because of his height and movement he generates off the deck as a result. This married with superb accuracy at lengths that had batsmen unsure of whether to play forward or back resulted in Pakistan’s downfall.

He snuffed out four of the top five in an intense opening spell that read 6-2-17-4. Where they needed counter-punch and get ahead of the asking-rate to put pressure on India’s bowlers, they folded. The game was soon beyond Pakistan and whatever that happened else was simply academic. Parag helped himself to a three-wicket haul even as the lower order slogged their way out in a desperate bid to end the pain. Eventually, it was an abject surrender.