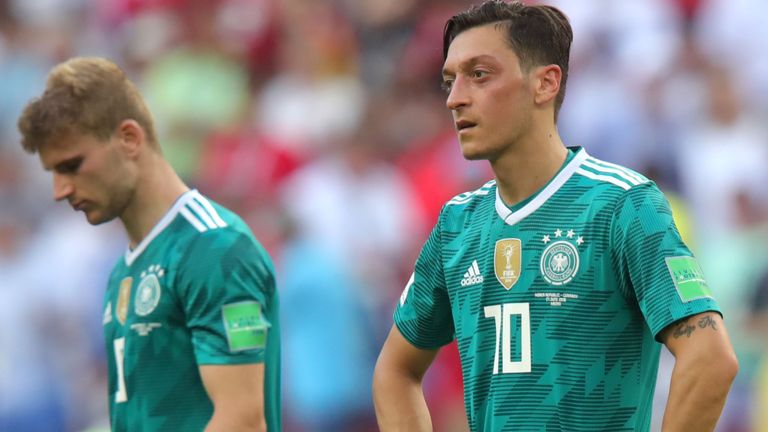 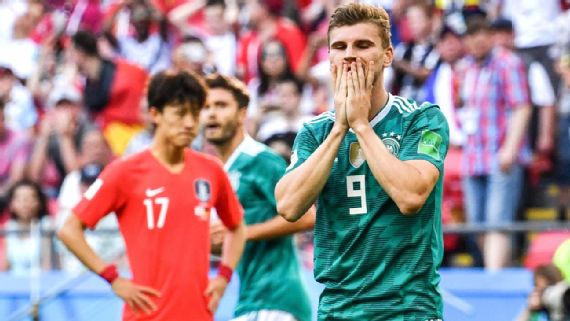 Three quick thoughts from South Korea’s 2-0 win over Germany at the Kazan Arena, which sees both nations eliminated from the World Cup at the group stage.

Ahead of the game in the tropical heat of Kazan, Joachim Low had again talked about the need to protect against counterattacks. Three measures, he hinted, were necessary: better ball circulation, better counter-pressing to recycle balls before counterattacks were launched and more protection of the space in front of the back four.

To achieve the first two objectives, Low brought back Mesut Ozil in place of Julian Draxler. The Arsenal playmaker took up some good positions between the lines but had more impact defensively, combining well with Marco Reus and Timo Werner to win the ball in dangerous positions for Germany. Leon Goretzka, a surprise addition on the right, where Thomas Muller usually roams, had the task of supporting right-back Joshua Kimmich against the threat of Son Heung-Min while box-to-box specialist Sami Khedira was reinstalled behind Toni Kroos as a (reluctant) holding midfielder.

The partial success of these changes in the lineup — Niklas Sule also replaced suspended Jerome Boateng — in Germany’s play “against the ball” was unfortunately offset by a severe lack of fluidity in their play with it.

Khedira’s limited range of passing and lack of pace once again hurt the holders’ approach play. They often seemed caught in between two minds: should they try to hit runners early or keep the ball in the oppressive heat with a view to exhaust the South Koreans? The uninspiring mishmash was summed up a few minutes before half-time when Goretzka took the ball from a deep position and started running down the channel all by himself, until his path was blocked by a red shirt.

Shin Tae-Yong’s team felt it more difficult to keep up the tempo in the second half and involuntarily dropped deeper. Germany’s game in possession became a little more composed as a result for the opening spell after the break, but a header from Goretzka and a skewed volley from Werner aside, chances were still at a premium. The RB Leipzig man did not lead the line effectively and was much happier on the right when Mario Gomez came on on the hour mark.

In a tournament that saw them create little to nothing from corners and set pieces — Kroos’ wonder strike vs. Sweden apart — the inability to produce from open play was their downfall. One has to wonder about all the pre-tournament work that was allegedly done on triangles and approach play. There was nothing to be seen of it.

3. Can Low survive this debacle?

Normally, the national coach would fall on his sword in such circumstances, but Low will be able to decide his own fate after winning the World Cup four years ago. A lack of credible alternatives will see the German FA try to hold on to him, but he might feel too embarrassed to continue after failing to find a sensible formula in this wretched tournament.

His reign might well have come to an end.