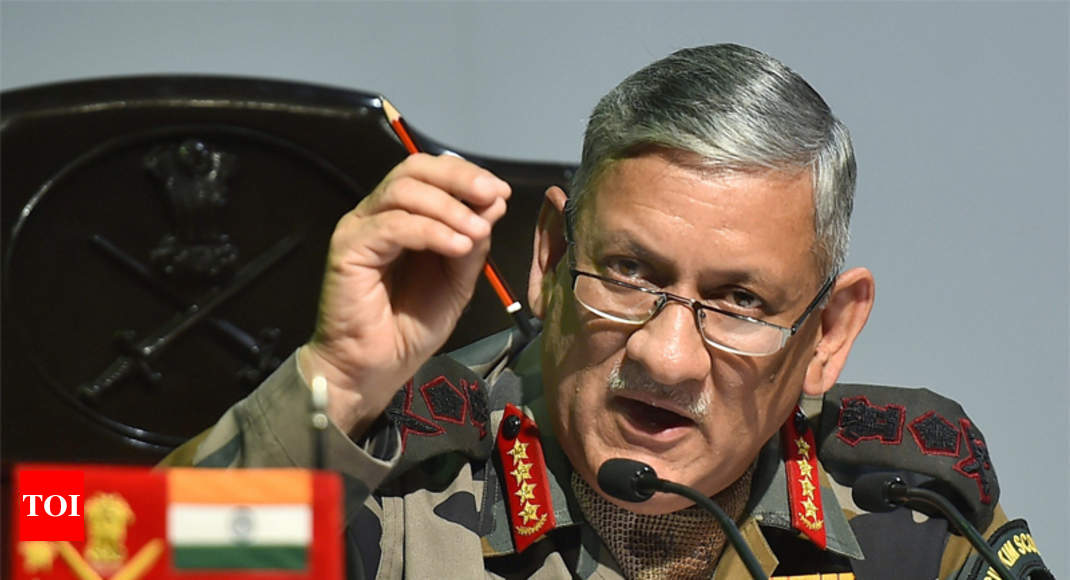 NEW DELHI: Days after imposition of governor’s rule in Jammu and Kashmir, General Bipin Rawat on Friday said Army was operating with “people-friendly” rules of engagement in the Valley.
“Our basic purpose is to go after terrorists who create violence and disturbance in the Valley. Our aim is not to cause inconvenience to civilian population who are not indulging in arson or violence,” the Army chief said on the sidelines of an event here.

Jammu and Kashmir was placed under governor’s rule on June 20, the fourth time in the last one decade, after the BJP withdrew support to its alliance partner PDP forcing Mehbooba Mufti to resign as the chief minister of the state.

“There is nothing like stepping up… Army continues to operate with the formulated rules of engagement,” Rawat said when asked whether security has been stepped up in the Valley after the fall of the government.

The Army chief said in addition to the “stringent” rules of engagement, local formation commanders continuously give guidelines to soldiers as to how to operate.

Gen Rawat had earlier dismissed the recent UN report on alleged human rights violations in Kashmir as “motivated” and asserted that Indian Army’s record in this regard was “absolutely above board”.

The Army chief today interacted with a group of school students, including five girls, from Baramullah and other neighbouring regions of the Valley who visited him here at South Block as part of a national integration tour.

“The message we want these children to go back with, is that if terrorist activities and stone-pelting stops in Kashmir, it too can prosper like Delhi or other big cities, and perhaps even better,” he said.