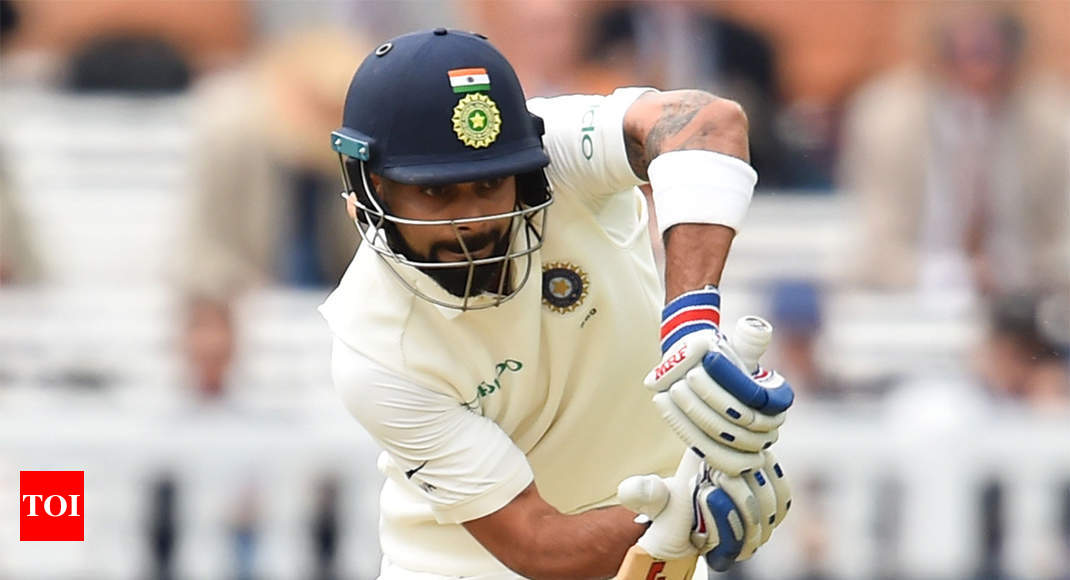 MUMBAI: Former India captain Sunil Gavaskar praised Virat Kohli’s batting in the first Test against England and attributed his success to an adjustment in bat-speed.

After a horror tour of the country four years ago, Kohli notched up his first century on English soil in the opening Test, albeit in a losing cause.

“It’s brilliant! The adjustment that he’s made in his bat speed. In 2014, he was feeling for deliveries outside the off-stump. Now he’s waiting for the ball to come, not pushing at the ball as much. At the start, he does. But that happens with everyone,” Gavaskar, an expert with official broadcasters Sony Pictures Network, told a select group of reporters.

Kohli struggled in the 2014 series and was particularly troubled by seamer James Anderson. He buried the ghosts of that tour by scoring an emphatic 149 and 51 in the first Test at Birmingham, which India lost just by 31 runs.

“The way he’s made that adjustment, mental adjustment, that is brilliant, fantastic. And that is the reason why he was able to get big runs. It’s just that little technical adjustment where he’s not pushing and playing close to the body,” explained Gavaskar, the first batsman to score 10,000 runs in Test cricket.

According to Gavaskar, the English conditions demand a lot more footwork and patience.

“It demands a lot more of your footwork, patience, because the ball keeps moving off the surface, you will get the odd scoreable deliveries which you must capitalise on, but in conditions in England like it happened in Birmingham, you have to be more watchful.

“We did not except such a thing because in June and July the weather was like you get in India. You can never be prepared for these kind of conditions. For players from the sub-continent, it’s not very easy, which is why I keep saying one must play more red-ball cricket, because that gives you a little bit of idea.

“You may not get world class bowlers but at least you will be playing first class bowlers,” said the batting great.

India trail 1-0 in the five match series, but Gavaskar termed the visitors slow starters, and expressed optimism that they could make a comeback.

“Yes absolutely, they missed out on the opportunity in South Africa, but I do believe that they have the opportunity here because this is five Test series and you can always comeback, even if you are 2 down, you can still come back. It’s been known to happen.”

“India has been traditionally slow starters overseas, in the third Test we came back (in South Africa), but if it has been a five-Test series, we could have won fourth and fifth as well. So that is the big plus as this tour is concerned, that the Indian team will get an opportunity to come back and may be win this series,” he added.

Asked how the visitors can make a comeback in the series, Gavaskar was crystal clear in his views – the batsmen have to make runs.

“Basically, the batsmen have to make some runs. The bowlers are taking 20 wickets; they did that in South Africa as well where they got 60 wickets. Batsmen, even in small totals, were not able to make those runs. But that’s not an Indian situation,” he said.

He also feels that the selectors are clear in their views as they opted for the young and aggressive Rishabh Pant.

“It is an opportunity for sure and for the third Test he might get into the team. In fact he might get in the team as a batsman down the order rather than as a wicket-keeper.

“He certainly is in the frame, the fact that he was chosen ahead of everybody else the moment (Wriddhiman) Saha was declared unfit, just tells you the thinking of the selection committee and team management,” he signed off.