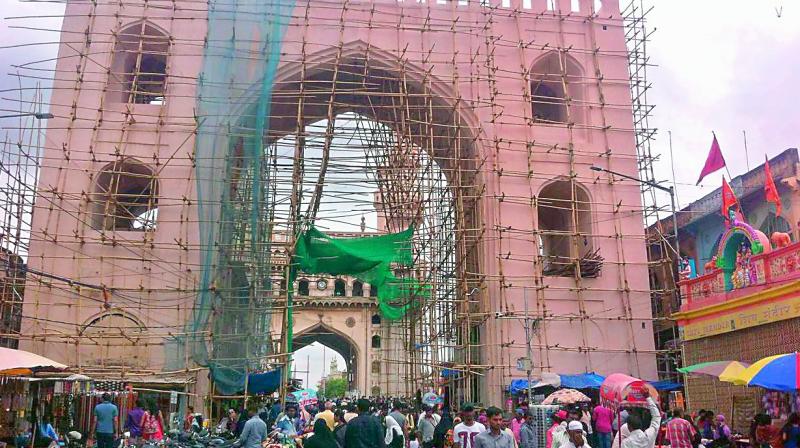 Hyderabad: The Greater Hyderabad Municipal Corporation has decided not to allow petrol/diesel vehicles in a 100-ft radius of the iconic Charminar once the flagship Charminar Pedestrianisation Project (CPP) is completed. A  50-ft radius around the monument will be open terrain where only tourists will be allowed; in the next 50-ft radius battery-run vehicles will be allowed.

The civic body will purchase the battery-run vehicles which will connect Charminar with adjoining areas of the Old City within a two-km radius. The corporation has decided to provide this form of transport for tourists and visitors from areas like Shalibanda, Madina and Chowmohalla Palace to minimise air and noise pollution and protect and conserve the more than 400-year-old monument

The corporation will construct permanent bollards which will demarcate the 50-ft open terrain. Fifteen battery-run vehicles will pick up visitors within two-km radius and drop them the second 50-ft radius. The corporation has also decided to acquire 16 public and private properties, including the Charminar police station and Sardar Mahal GHMC zonal office. Both the police station and Sardar Mahal are heritage buildings and will be restored and used as tourist facilitation centres, with toilets, baby-feeding rooms, charging points and other facilities. Acquisition of these 16 properties will ensure a clear view of Macca Masjid from Charminar, which is now obstructed.

K. Srinivas Rao, director of the GHMC’s planning department, said that the corporation has already prepared a detailed project report on converting the first 50 metres around the Charminar into a tourist spot and allowing battery vehicles in the next 50 metres radius. He said a final decision will be made after discussing it in a meeting headed by Chief Secretary S.K. Joshi on July 6.

Mr Rao also said that 28 movable hydraulic bollards and 125 fixed bollards will be set up in the third radius to prevent fuel-run vehicles from proceeding further.

There will be parking facility at Shalibanda bus station. Mr Rao said the corporation is keen to ensure that there is no noise and air pollution within 200 metres of the monument so that tourists have a pleasant experience which is lacking now.