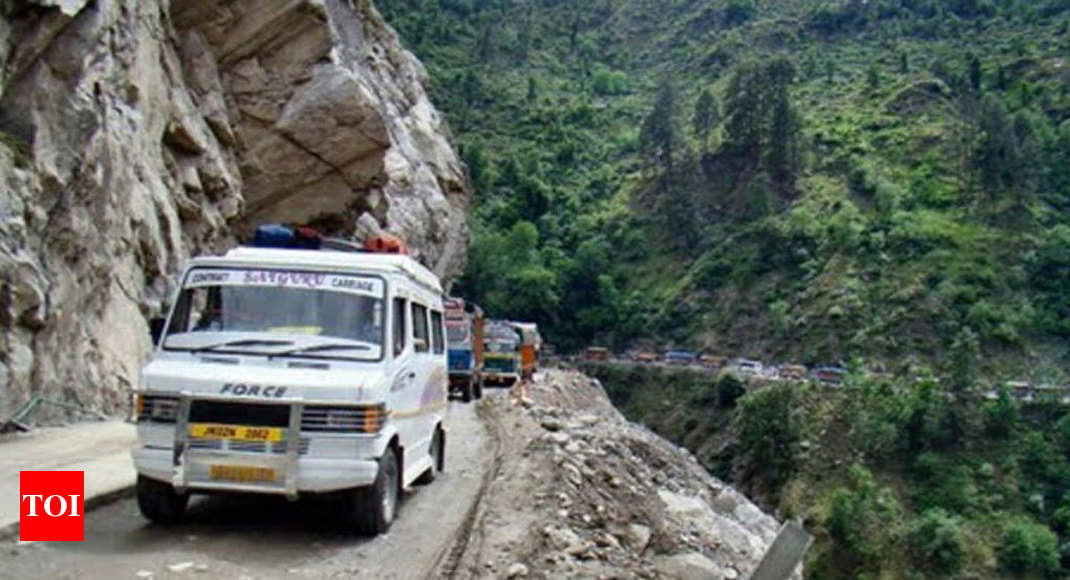 BANIHAL (J&K): A fresh landslide blocked Jammu-Srinagar national highway late this afternoon, leaving hundreds of vehicles including those carrying Amarnath pilgrims to the base camps in the Valley stranded, a police official said.
Heavy rains triggered the fresh landslide at Gangroo near Ramsu along the 260-km long highway – the only all weather road connecting Kashmir with rest of the country, and efforts are on to made it traffic worthy, deputy superintendent of police Vishal Manhas told PTI.

He said the blocking of the highway left hundreds of vehicles, including the convoy carrying Amarnath pilgrims, stranded.

However, he said all the vehicles have been taken out from the landslide and the shooting stone prone areas as the safety of the commuters is the top priority of the police.

The Amarnath pilgrims had reached Makarkoot when the landslide struck, Manhas said adding heavy rains are continuing all along the highway and at least two more hours are required to clear the arterial hilly road of the blockade.

Heavy rains in Banihal-Udhampur sector had also triggered landslides and shooting of stones at four places at Panthal, Nedgard, Digdol and Samroli this morning, blocking the highway, the officials said.

However, they said the agencies concerned pressed men and machines into service and after hectic efforts cleared the blockade in the shortest possible time at around 0915 hours.

Massive traffic jam was reported at several places along the highway throughout the day, causing lot of hardships for the traffic personnel and police to manage the traffic despite the rain, they said.

Earlier in the day, the Amarnath yatra to the cave shrine in south Kashmir was also suspended from the Baltal route due to multiple landslides en route caused by heavy rainfall in the Valley over the past two days.