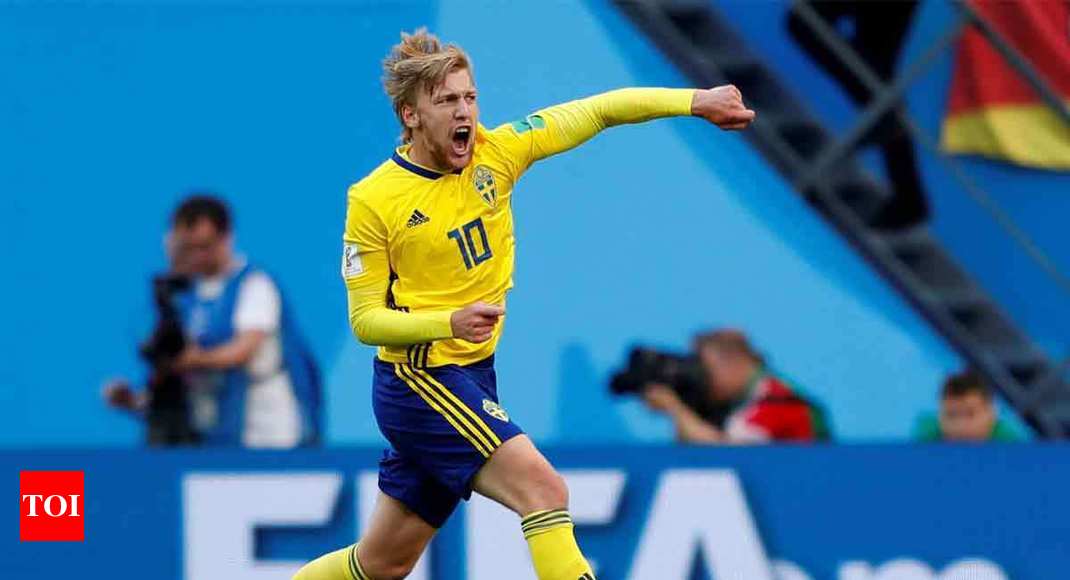 Saint Petersburg: Emil Forsberg had been woeful right up until the moment he seized this World Cup roundof-16 tie. Two minutes earlier he was lying prostrate on the floor, having just duffed a free-kick into the wall and hit the follow-up on to his standing foot and off the field, neatly encapsulating an hour’s fruitless effort.

The RB Leipzig winger was ineffective in the group stage, his position in the team only retained by the bare fact Janne Andersson’s squad contains no one else like him, a player who can control the ball and confound his marker in the same spinning motion, who can duck and weave and sting the opposition. Yet for so much of this meeting with Switzerland in St Petersburg he failed to show that ability.

The lack of quality on show made you wonder how Switzerland drew with Brazil and Sweden thrashed Mexico. Sweden’s strikeforce is made up of a forward from UAE side Al Ain and a substitute for Toulouse. There was no sense of putting on a show, like you felt watching France vs Argentina or Japan vs Belgium, but it was all part of this game’s awkward charm. This was edgy and errorstrewn, everyone involved affected by the knowledge that the reward was an exhilarating adventure into unchartered territory.

Sweden showed the simplicity which won Group F, lined up in yellow walls in front of their area, stubborn and stoic as Switzerland dominated the ball. Embers of promising buildup were snuffed out by woeful finishing, like Marcus Berg’s full blast wide, Albin Ekdal’s shinner over the bar and Ola Toivonen’s hack which flew even higher. The Swiss admittedly carried a little more pretence of talent in Granit Xhaka’s languid style and Xherdan Shaqiri’s superfluous stepovers. But in reality this was a fight for the right to be the ultimate underdog of the World Cup’s final eight – to be the world’s second team.

And so it was entirely in keeping with both the match and Sweden’s campaign so far when, on 66 minutes, Forsberg’s low shot was deflected into the top corner of Yann Sommer’s goal. So much of Sweden’s success in Russia has relied on a little hard-earned luck: two penalties in the group stage, a comedic own goal, even the fortuitous sliced shot which landed at left-back Ludwig Augistinsson’s feet to volley home against Mexico.

Here Forsberg dropped a shoulder to leave Xhaka behind before slamming an effort on target, and unfortunate Swiss defender Manuel Akanji did the rest. This was another feather in the cap for Andersson’s rebuild in the post-Zlatan era, another victory for team ethic over individual talent.

Sweden will play in their first World Cup quarterfinal since USA 94, against the winners of England vs Colombia. If those two think their quarter of the draw looks soft, we can be sure Sweden will be thinking exactly the same.