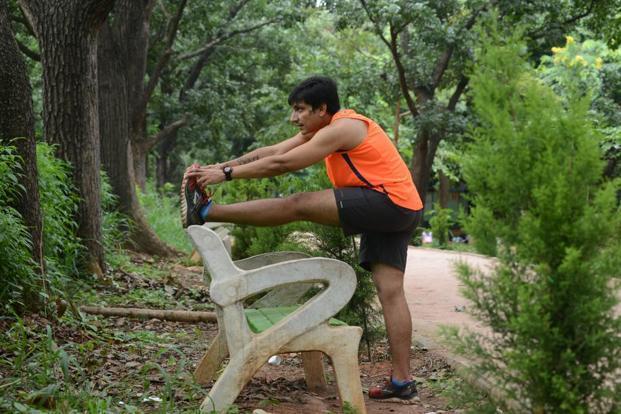 Rajiv Mehta’s D:FY will have 22 standalone stores across eight cities by the end of December. Photo: Hemant Mishra/Mint

New Delhi: Rajiv Mehta, who launched and grew the German sportswear brand Puma to revenues of Rs780 crore in nine years from 2006-2014, launched his own sports lifestyle brand D:FY on Tuesday. Mehta also plans to bring US-based Brooks Running Co, maker of running shoes since 1977, to India later this year in a five-year exclusive partnership.

D:FY will have 22 standalone stores across eight cities by the end of December. The brand will also be sold online in an exclusive partnership with Amazon and in a shop-in-shop format at the Central department store chain, said Mehta who had joined textile and retail company Arvind Ltd to set up its sports shoes division before turning entrepreneur.

The founders have invested $3 million since inception and plan to put in an additional million dollars for marketing and promotions, said Mehta. The sportswear brand has taken on board bowling veteran Anil Kumble as its mentor for product design. Additionally, it has roped in cricketer Hardik Pandya as well as Bollywood actress Nidhi Agerwal as brand ambassadors.

Sports as a category is one of the largest within fashion, said Mayank Shivam, fashion director, Amazon India. According to Shivam, the category is seeing broad-based growth driven by Tier II and Tier III towns, which account for 60% of overall sales. Moreover, within the category, apparel sportswear growth is being driven by women buyers whereas sports shoes growth by kids followed by women, he said.

To be sure, the sportswear category is seeing a lot of new entrants. International brands like Under Armour and New Balance have entered the market recently and on Amazon they are growing at three times the market rate, said Shivam.

Moreover, even existing brands like shoes brand Red Tape has launched a sportswear range. Besides a number of startups, some of which are helmed by celebrities including former one-day international Indian cricket captain’s MS Dhoni’s Seven and tennis player Mahesh Bhupathi’s Zeven and actor Hrithik Roshan’s HRX are in the athleisure space.

The reason is simple. Health consciousness and staying fit is a trend that is here to stay, says Anil Talreja, partner at consulting firm Deloitte India. Think about it, today schools have introduced extra-curricular activities allowing children to take up sports. Additionally with movies like Bhaag Milkha Bhaag, Mary Kom and India’s winning performance in the recent international tournaments like Asian Games are also helping sports other than cricket to find favour among the youth.