Categorized as
165
Tagged as
GermanyMexicosweden
Related

The curse of the defending champions caught up with Germany. After France (2002), Italy (2010) and Spain (2014), Joachim Loew’s pre-tournament favourites and four-time world champions suffered a similar exit in Kazan on Wednesday.

The battle for the second position is not something Germany relish. Known for their cold and calculative movement through the stages, they ran into a difficult Russian puzzle. After losing the opener and barely tumbling over the line in the second, the Germans went into the match against South Korea clutching three hard-earned points, the affluence of goals starkly missing in action.


It’s quite an unfamiliar situation for Joachim Loew, who led the side to the title four years ago. The German coach had never gone out in the group stage and the fear of that probably affected the free-flowing, if not spectacular, game Germany are known for.

The race with Sweden to escape from the group reached half-time with the scoresheet blank at the Kazan and Ekaterinburg arenas.

Uncannily, exactly on the 49th minute, Leon Goretzka’s header was parried away superbly by a diving South Korean goalkeeper Jo Hyeonwoo. A thousand kilometres away in Ekaterinburg, Ludwig Augustinsson scored for Sweden. 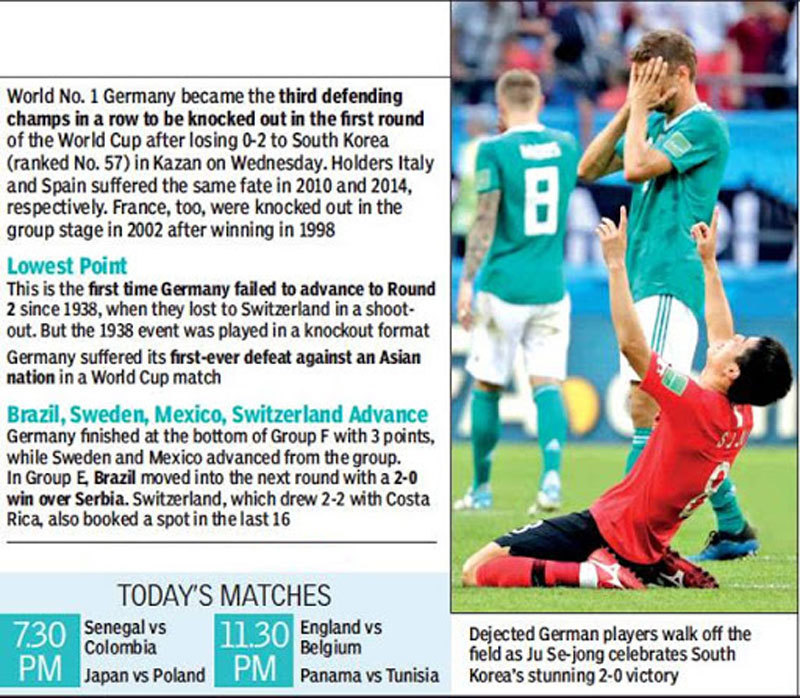 With the possibility of an early exit getting stronger, Loew decided to introduce fresh legs.

Throwing aesthetics out of the window, Loew withdrew Sami Khedira and sent in Mario Gomez to exploit the aerial route towards goal. In Russia, Germany’s famed midfield of Toni Kroos, Mesut Ozil, Marco Reus and Leon Goretzka failed to work as a unit depriving Thomas Mueller and Timo Werner up front. Mueller, who scored five each in his last two World Cups, said goodbye to Russia without scoring.

Not even five minutes had passed since Gomez took the field, Sweden increased the tally when captain Andres Granqvist converted from the spot against Mexico. Hector Moreno lost his bearings and upended Marcus Berg inside the box. Moreno earned a yellow and will miss Mexico’s Round of 16 ambush. To complicate matters for Germany, Edson Alvarez added salt to Mexico’s wounds with a self-inflicted goal. Sweden scored one of their biggest victories in the World Cup since television went colour. 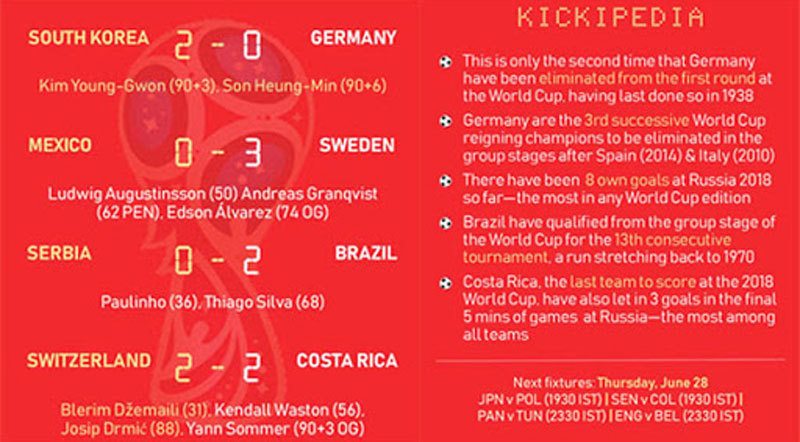 With four minutes to go, Ozil curled in one from the right into the box. Matts Hummels, whose header knocked out France in 2014, nodded high and wide. Similar position, similar situation but four years later, a different outcome.

The referee showed six minutes of injury time for Germany to conduct rescue operations. Instead, South Korea did the unthinkable. Kim Young Gwon turned in a lucky drop as Kroos tried to toe poke the ball away to safety from a corner. The referee’s assistant raised the flag and VAR was brought in. It ruled for Korea as the last touch was from the German midfielder.

In the remaining minutes Korea added more to their misery when Manuel Neuer tried to do what his strikers had failed to. Seeing the German goalkeeper around the Korean box in search of god-only-knows-what, Ju Se-Jong punted the ball 80 yards down the pitch and Son Heung-Min gleefully tapped the ball into the net, unguarded and empty – a rare sight in front of a German goal.

In Ekaterinberg, Sweden played out their four minutes of injury time to register a 3-0 win and waited the next four minutes on the pitch to be convinced they had advanced.

Korea scored one of their biggest victories on the World Cup stage since 2002 quarterfinals victory over Spain and are still going home but they have ‘world champions’ Germany to keep them company. Loew’s boys will retreat towards Berlin with tails between their legs.