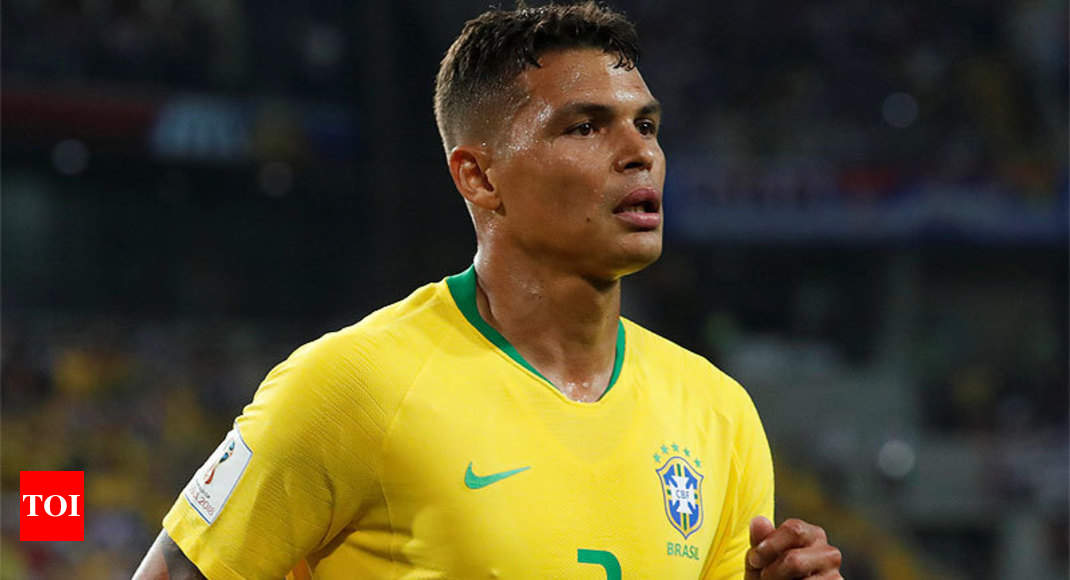 MOSCOW: “That’s what I look forward to – getting your name written forever in the history of Brazilian football and raising the World Cup trophy.”

Thiago Silva’s philosophy is clear and simple. Like most Brazilians promising enough to wear the shirt weighed in gold, Silva has often flirted with the tag of being the best defender in the world since his AC Milan days. After drawing praise from Paolo Maldini and Franco Baresi during his three-year stint with the Italian giants, it has been a long and arduous route to Russia for Silva, with a World Cup debacle thrown in between. Falling in and out of favour with Dunga, who was reinstated to rescue Brazil’s fortunes after the earth-shattering Mineirazo, Silva remained focused despite the doubts within.

On Wednesday evening in Moscow’s Spartak Stadium, Silva forced his way into the debate of being the best defender among Brazil’s array of attacking stars.

With the Selecao fighting to restore their 1-0 lead against a resurgent Serbia in the second session of their final group phase game, Silva and Miranda arrived to take position at the near post of the Serbian goal as Neymar prepared to take a corner.

Aleksander Mitrovic and Miranda grappled and took a tumble as Silva rose to the occasion to slice a powerful header home. The embrace with Neymar followed, marking an end to the uneasiness between the two since the days of Dunga.

Silva opened his heart to the Brazilian media. “In the moments when we were suffering, we stayed focused to prevent the other team from attacking,” he said after Tite’s side kept a seventh clean sheet in eight outings.

“Soon after, we managed to find a ball that we have worked a lot on in training, with Neymar at the near post. We were happy with that.”

ALSO READ: Brazil charm their way into round of 16

Almost unbeatable in the air, Silva’s understanding with Joao Miranda in the heart of Brazil’s defence has evoked a rare confidence in Tite’s selection.

Booked out of that fateful semifinal against Germany in 2014, captain Silva suffered in the purge that followed. Too fragile to handle the complexities of an international encounter seemed to be the growing narrative against him, the critics citing that he turned his back when his colleagues were taking penalties against Chile during shootout.

Brazil were heavily criticised for their emotional fragility during the 2014 tournament under Felipe Scolari. Dunga was a deliberate icy antidote to Scolari’s arm-around-the-shoulder style and Silva, a little unfairly, became the poster boy of the Selecao’s team of cry-babies.

When Dunga wrested the armband from Silva and ordained Neymar as captain, Silva spoke out, trying to demystify the criticism that he thought was aimed at him. In retaliation, Dunga dropped him. Calling him back for the 2015 Copa America didn’t do any good. Totally convinced of Silva’s psychological fragility, Dunga dropped him again.

Once Tite was handed the reins of Brazil in 2016, the door creaked opened for Silva again, first as a reserve and then as a starter as his PSG club mate Marquinhos picked an injury.

Silva hasn’t looked back since and had played a partially significant role in the 1-0 revenge win against Germany in a friendly.

A consummate performance in Berlin appears to have convinced Tite to reinvest faith in the 33-year old. Silva turns 34 in September and once Russia is done and dusted, Tite will have to look beyond the ageing pair of Silva and Miranda. But this summer represents a four-year road to redemption for Silva’s international career.

Brazil fans are showing faith again, and talking about the ‘hexa’. It is still early days, but Silva’s consistency and courage will play a big role in how far Brazil go in Russia.