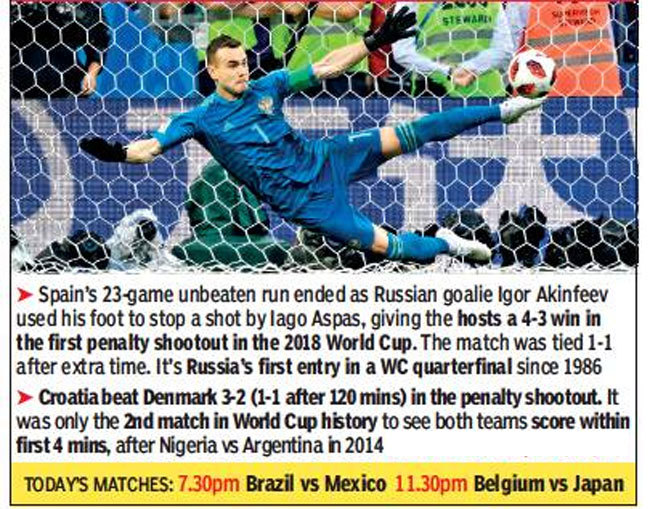 SAMARA: The press centre at Samara was a sight to behold. It became a microcosm of the Luzhniki in Moscow, which erupted after Iago Aspas’ penalty kick was kept away by Igor Akinfeev to send Russia into an orbit of mass hysteria on Sunday. It was the veteran goalkeeper’s second save after he denied Koke.

Russian journalists danced around the huge press centre screaming “Russia, Russia” as the cameras focused on Andres Iniesta’s face, signalling Spain’s 3-4 defeat in the penalty shootout after regulation time had ended 1-1. The Spanish midfielder’s eyes were red, trying hard to hold back tears as another pre-tournament favourite took a tumble in the minefield of Moscow.

Enjoying 79 percent of ball possession, Spain’s famed midfield comprising Isco, Asensio, Koke and Sergio Busquets failed to breach the red wall in front of Akinfeev’s goal. The master of circuitous play, Spain somehow managed to nose ahead after a self-inflicted misery from Sergei Ignashevich. Artem Dzyuba then converted a penalty three minutes before the break to pull the tournament hosts level at half-time.

Ignashevich, who returned from retirement in the team of Stanislaus Chercheshov, was left shell-shocked when the ball deflected off his heel to sneak into Akinfeev’s net. He was challenging Sergio Ramos when the free kick was floated in. That’s the only way Spain could have found the target with their much-vaunted passing game as the statistics showed that Fernando Hierro’s boys had completed 1006 passes. For all their possession, Spain had little to show for in terms of penetration.

ALSO READ: Russian goalkeeper thanks God for luck against Spain

Dzyuba’s header off a corner hit Gerard Pique’s arm and the striker converted the spot-kick that he had earned.

The Russians then put their lives on the line as Spain kept knocking the ball around their penalty area without being able to find a breakthrough. Hierro introduced Iniesta to force the issue but the pattern could not be broken even after 120 minutes of grinding, nerve-jangling flow of passes.

Defending took a lot out of the Russians and they exploited the new Fifa rule by bringing on Alexander Yerokhin as the fourth substitute in the 97th minute. Spain made their extra substitution seven minutes later when Rodrigo Moreno replaced Marco Asensio.

In the shootout that ensued, Iniesta, Pique and Ramos were successful in converting theirs while the Russians were flawless. Fedor Smolov, Ignashevich, Alexansdr Golovin, Denis Cheryshev were all on target much to surprise of the Russians who were eating their nails for dinner. “In the second half, we were trying to defend. We were hoping for penalties and that’s what happened, thank God,” Akinfeev said. “We are having a fantastic World Cup.”

His opposite number David de Gea, who came to Russia carrying the heavy burden of being the best in the world, left without the crown. Not being able to save any of the five kicks and diving mostly the wrong way will only see critics pull him down. 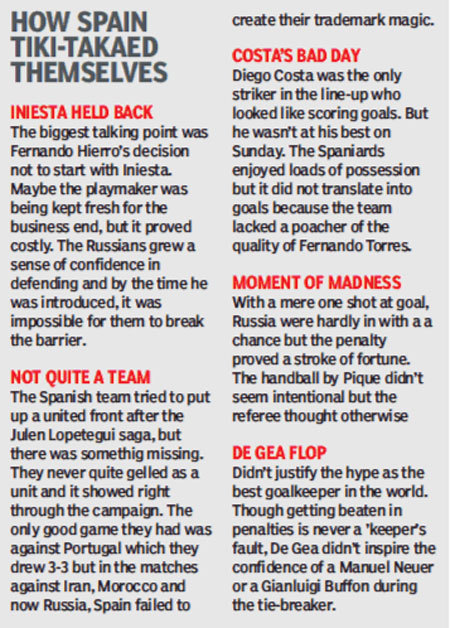