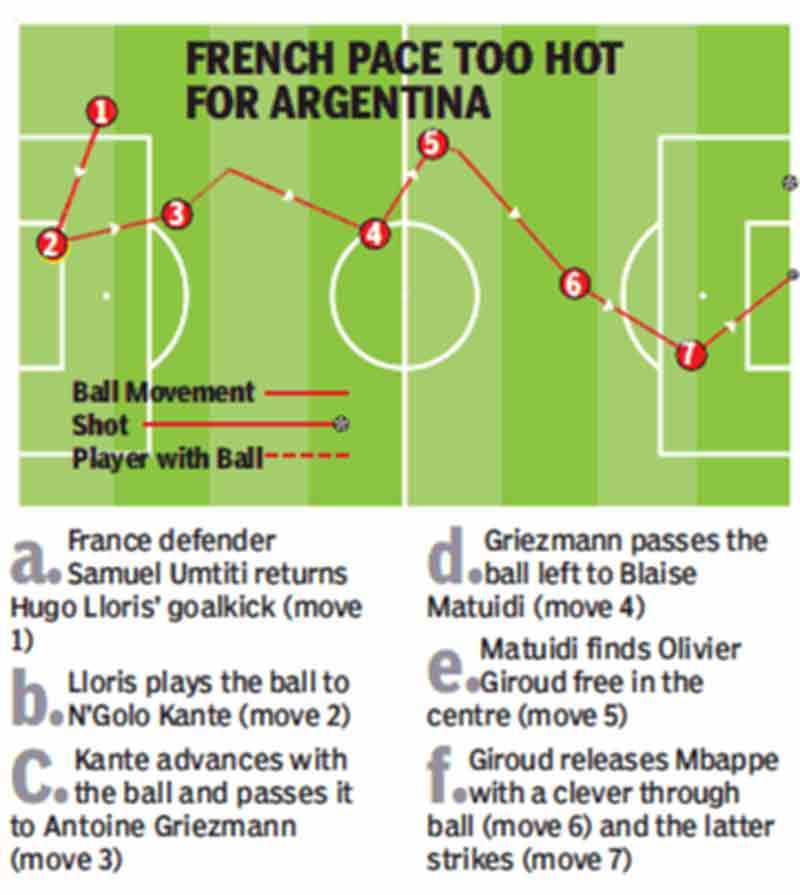 FRANCE CAN WIN BIG GAMES AS INDIVIDUALS, NOT AS A TEAM
France’s individuals were allowed to shine against Argentina who made it easy for solo players to influence the game. Mbappe’s runs and goals were all down to Mbappe. Griezmann’s goal from the spot was all down to Griezmann. Pogba’s precise range of passing was all down to Pogba. Argentina played without any structure that would usually be in place to force an opposition to play through the lines. If France’s opposition are an attacking side then they may not need much structure going forward.

MESSI BOWS OUT WITHOUT A GRAND FINALE

It was not meant to be. At no point did Argentina looked like winning the tournament. This leaves Messi with a World-Cupshaped hole in his illustrious career. Against France, so much of Argentina’s attention was focused on him which meant that France could also focus so much of their attention on their Messi. Pogba, Matuidi and Kante were always on hand to pinch the ball from him or halt his runs from deep.

ARGENTINA LET DOWN BY DISCIPLINE

Argentina have traditionally always been an imbalanced side, but this team is perhaps one of the worst teams at the back the side has brought to the tournament. There was panic at the back. Nobody really knew who they were marking or what happened if the ball was shifted wide. The defending was all reactive, there was no plan, leadership.

MBAPPE ANNOUNCES HIMSELF ON THE WORLD STAGE

The world’s second most expensive player has been lighting up the French league and the Champions League, and now he has asserted himself at the World Cup. His seven second 77-yard run from inside his own box was reminiscent of an Olympic sprinter. He glided past defenders like they were cones on a training pitch and eventually came to a halt when Marcos Rojo brought him down.