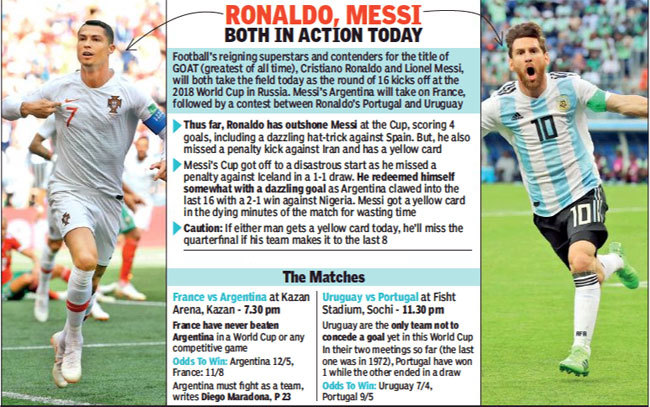 KAZAN: France seem to be obsessed with Lionel Messi. Well, who isn’t.

With their team full of explosive talent, a little more confidence and self-esteem was expected from the French national media on Friday. However, more than half the questions they threw at captain Hugo Lloris, France’s first choice goalkeeper, and later at the coach Didier Deschamps, were about Lionel Messi on the eve of France’s World Cup pre-quarterfinal clash.

Both answered with a lot of grace and respect at the Kazan Arena press conference room. “It is normal to talk about Messi and Ronaldo. They are regular stars for a number of years. Argentina had a difficult time in the group stage but they still qualified. We are expecting a big match tomorrow and we are ready to answer the call.”

Another question reminded Deschamps about that night in Paris when he led France against the Ronaldo-led Brazil in 1998. He was asked to compare with Saturday’s impending clash with Messi-led Argentina. The French World Cup-winning captain could not but agree with the similarity between the two situations.

ALSO READ: Maradona wants others to back Messi up

“We are talking about two huge players. Ronaldo with Brazil and Messi with Argentina can force a lot of parallels. But that was the World Cup final and tomorrow is a just the first step to a whole new ‘tournament’. We will try our utmost to secure the result in our favour and take a number of precautions so that Messi does not become dangerous.”

Messi can alter the fate of a game with “very little”, but the French coach also knows that Saturday’s game offers him with the best opportunity to get the record straight against Jorge Sampaoli’s struggling Argentinians. The last time France lost to a South American side in the World Cup was in 1978. At the Estadio Monumental, when the hosts got the better of France 2-1.

“I have been the coach of the French national team for six years now and we haven’t done too badly. We reached the World Cup quarterfinal in 2014 and the Euro 2016 final. Now we are in the Round of 16 without losing a game. We enjoyed a lot of exciting nights, like the one in Ukraine seeking our qualification to Russia. We expect a similar night here tomorrow and we are focused on our preparations,” said the coach, for whom the pre-quarterfinal will be the 80th in charge of France.

Inexperience is one area that concerns Deschamps along with Messi. “He has 65 goals in 127 matches. Even Mascherano (Javier) is nearing his 150th cap,” Deschamps rattled out the numbers, showing the kind of homework that has gone into preparing for this game. “Our inexperience is not an excuse. It is a reality. Fourteen of our squad had never competed in a World Cup game. We are starting from scratch.”

Finally, someone outside of France asked him about his midfield combination of Paul Pogba and Ngolo Kante and Deschamps seemed relieved. “They complement each other. Kante is more aggressive and good at recovering the ball. Paul is more creative and good with assists. But I must say that Kante often makes interesting passes upwards.”

Technically, France have scored only one from open play so far, with Kylian Mbappe scoring against Peru. Antoinne Griezmann knocked in a penalty in their opening game against Australia and France’s third goal so far is an own goal from Australian Aziz Behich. “He played 65 minutes against Denmark and he seems to have picked up some momentum. We need Antoinne to be at the top-level tomorrow,” said his coach.

On France’s defensive stability, Deschamps said Samuel Umtiti and Raphael Varane’s Spanish experience may come in handy. “They are aware of Messi’s talent and unpredictable ability to send a spark across the stadium. We will try to limit his impact.”