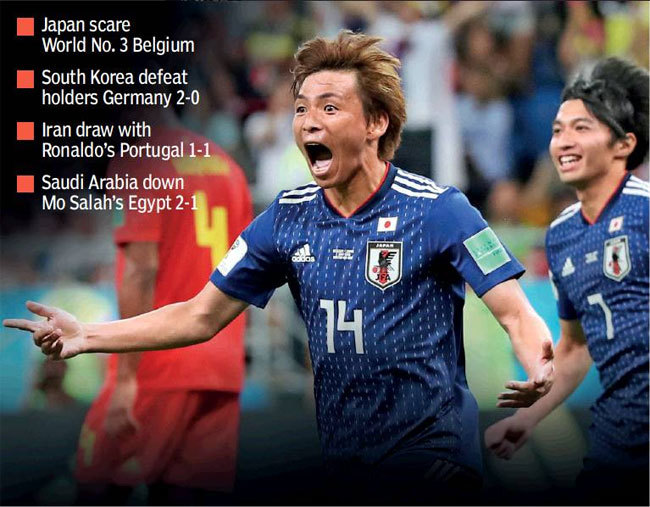 When Japan led Belgium 2-0, courtesy two sensational strikes, the world rubbed its eyes in disbelief. Was history happening here? Every football romantic prayed for the Asian team. Nobody was expecting such a turn of events, especially since the Samurai Blue had sneaked into the pre-quarters dishing out strategically defensive football in the tricky group game against Senegal. Even their fans had booed them. But the world saw a different Japan, especially in the second half, on Monday night.

The dream ended heartbreakingly in the last second of injury time. Every football romantic mourned their exit. In India, many felt a sense of shared Asian pride and solidarity due to the bold and beautiful performance of coach Akira Nishino’s boys.

In a World Cup where no African team reached last 16, the Japanese had struck a blow for Asian football. They were not alone – South Korea had defeated holders Germany 2-0, Iran had held Ronaldo’s Portugal 1-1 and Saudi Arabia had beaten Mo Salah’s Egypt 2-1.

Of course, it can be argued that Korea had reached the semis in 2002 as co-hosts. Japan too had entered the knock-out round in 2002 and 2010. But this was different. This was more.

This was more than even North Korea’s 3-5 loss to Eusebio’s Portugal in 1966. This was a moment when Japan, World No. 61, had an in-form Belgium, World No. 3, on the mat and ready for the count. This is a match of which millions will replay the last few seconds and long for an alternate ending. This is a match that will be archived forever in our memories as a sporting masterpiece of melancholy.