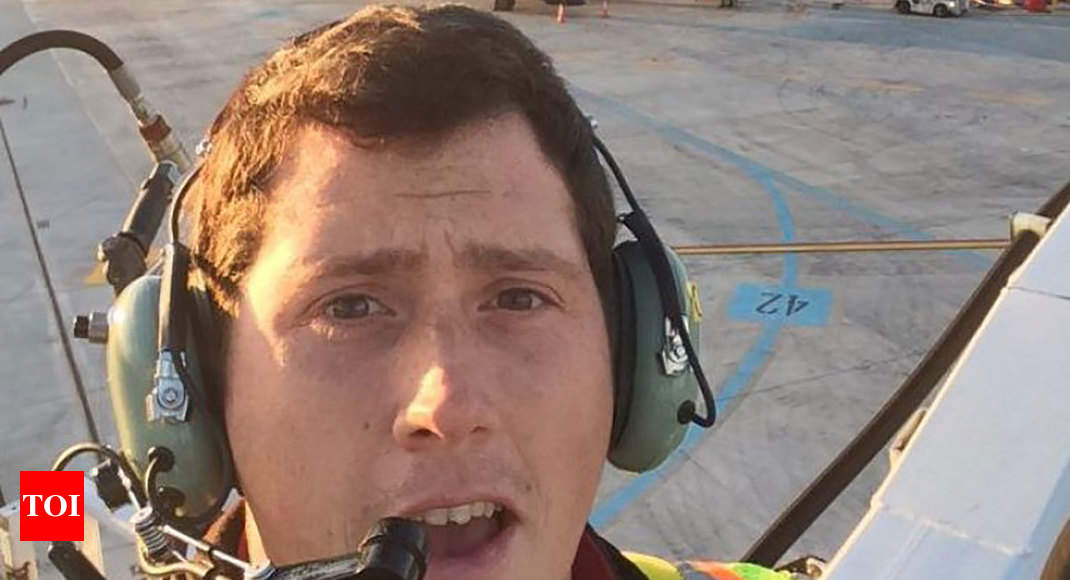 WASHINGTON: The family of an airport ground service agent who stole a passenger plane in the US, performed some amazing stunts and then crashed it, taking his own life, are stunned and heartbroken.
“This is a complete shock to us,” the family of 29-year-old Richard Russell said in a statement they released last night after he stole a passenger plane on Friday from the Seattle-Tacoma International Airport and was killed when he crashed on Ketron Island, some 40kms away.

“We are devastated by these events, and Jesus is truly the only one holding this family together right now,” the statement said while describing Russell as “a faithful husband, a loving son and a good friend.”

Referring to audio recordings of Russell talking to air traffic control during his hour-long flight, the statement said his “intent was not to harm anyone. He was right in saying that there are so many people who have loved him.”

Russell, a Horizon Air ground service agent for three-and-a-half years, was the only person aboard the plane, the Pierce County Sheriff’s Department said.

The incident, which the FBI’s Seattle office did not consider terrorism, raises questions about airport security. Investigators headed on Saturday to the crash site to recover the plane’s data recorders and Russell’s remains as part of a criminal probe, authorities said.

The 76-seat Horizon Air turboprop plane took off without authorisation at 7:32 pm local time on Friday, with Russell, who was not a pilot, at the controls, officials said.

After Russell talked periodically with air traffic controllers for about an hour, the plane crashed on Ketron Island, officials said.

Video from a witness on the ground shows the plane at one point pulling up for a loop, putting the aircraft upside-down and then pulling back up just feet above a body of water.

Russell was credentialed to be in secure areas at the airport, said Brad Tilden, CEO of Alaska Air Group, which owns Horizon Air.

He passed a series of background checks to gain his position, as he did not have any criminal convictions.

Airline officials believe he was in uniform and worked a shift on Friday, Tilden said at a news conference.

The plane had been parked in a maintenance area and was not scheduled for a passenger flight, Tilden said.

He had no purpose to be at that plane Friday evening “other than … what he did do,” Tilden said.

Besides his other duties, he was qualified to tow aircraft, said Gary Beck, Horizon Air’s president and chief executive officer.

Officials do not believe Russell had a pilot’s license, and they do not know how he knew to fly the plane.

“I’ve got a lot of people that care about me, and it’s going to disappoint them to hear that I did this,” Russell says. “I would like to apologise to each and every one of them. Just a broken guy, got a few screws loose, I guess. Never really knew it until now,” he told the traffic controllers, who tried to help him control the plane.

The sheriff’s department described Russell as suicidal. It did not elaborate.

Earlier in the flight, Russell told the air traffic controllers says: “This is probably, like, jail time for life, huh? I mean, I would hope it is, for a guy like me.”

“Well,” a controller responds, “we’re not going to worry or think about that. But could you start a left-hand turn, please?”

Later, a controller discusses getting a pilot on the radio to help Russell control the aircraft.

“Nah, I mean, I don’t need that much help. I’ve played some video games before,” Russell responds.

Russell repeatedly says he would do a roll. Not long before the crash, a pilot who had been helping controllers advise Russell appears to mention the manoeuvre.

“Congratulations. You did that. Now let’s land that airplane safely and don’t hurt anybody on the ground,” the helping pilot radios.

Russell responds, “Awwww-right. Ah, dammit. I don’t know, man! I don’t know! I don’t want to. I was kinda hoping that was going to be it. You know?”

The plane eventually crashed on sparsely populated Ketron Island, starting a fire in the woods but injuring no one outside the plane.

The fuselage was fragmented and appeared to be upside down, said Debra Eckrote, regional chief for the National Transportation Safety Board.

The cause of the crash was not immediately known, but the two F-15 fighter jets which were scrambled following the incident, did not bring the plane down, Eckrote said.

The FBI will lead the investigation, said Eckrote, the NTSB regional chief.

“The FBI is going to be thorough, which means taking the time needed to scour the area, delve into the background of the individual believed responsible for Friday night’s incident, and review every aspect with all appropriate public and private partners,” the FBI’s Seattle office tweeted yesterday.

Investigators were trying to retrieve the plane’s flight data recorder and its cockpit voice recorder.

“He might have been talking to himself in the cockpit,” so the voice recorder may provide additional information that wasn’t recorded in radio traffic, the NTSB regional chief said.