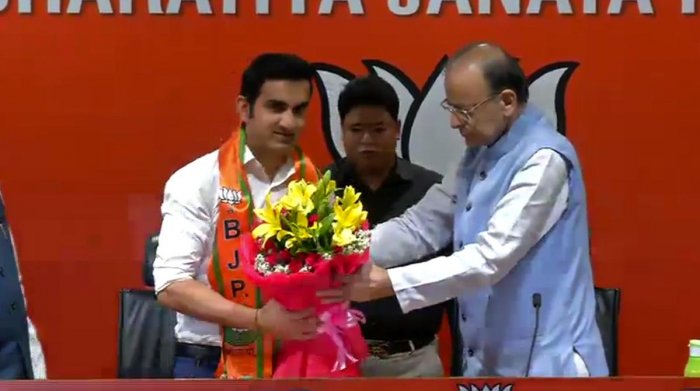 Former Indian cricketer Gautam Gambhir joined the Bharatiya Janata Party on Friday with weeks to go for the Lok Sabha elections and said he was ’impressed by Prime Minister Narendra Modi’s vision’.

“I am impressed by Prime Minister Narendra Modi’s vision…

I have contributed to the field of cricket and now hope to do more for the country”, the 37-year-old cricketer said.

Inducting the former cricketer into the party, Finance Minister Arun Jaitley said, “Gambhir has excelled in his career and the party hopes to utilizes his talent. The BJP will benefit from his talent.”

while the Congress Central Election Committee has announced the seventh list of candidates for the ensuing elections to the Lok Sabha and the Andhra Pradesh Legislative Assembly.

In Bihar, the Rashtriya Janata Dal (RJD)-Congress Mahagathbandhan (Grand Alliance) is expected to make an announcement on the pre-poll alliance today.

The BJP also announced on Thursday evening its first list of candidates for Lok Sabha elections that begin next month.

Prime Minister Narendra Modi will contest from Varanasi in Uttar Pradesh, the parliamentary seat he retained after winning two seats in the 2014 election while BJP president Amit Shah will fight from Gandhinagar in his home town Gujarat; a seat where BJP veteran LK Advani is the sitting lawmaker.

The Lok Sabha elections will be held in seven phases beginning April 11; votes will be counted on May 23.