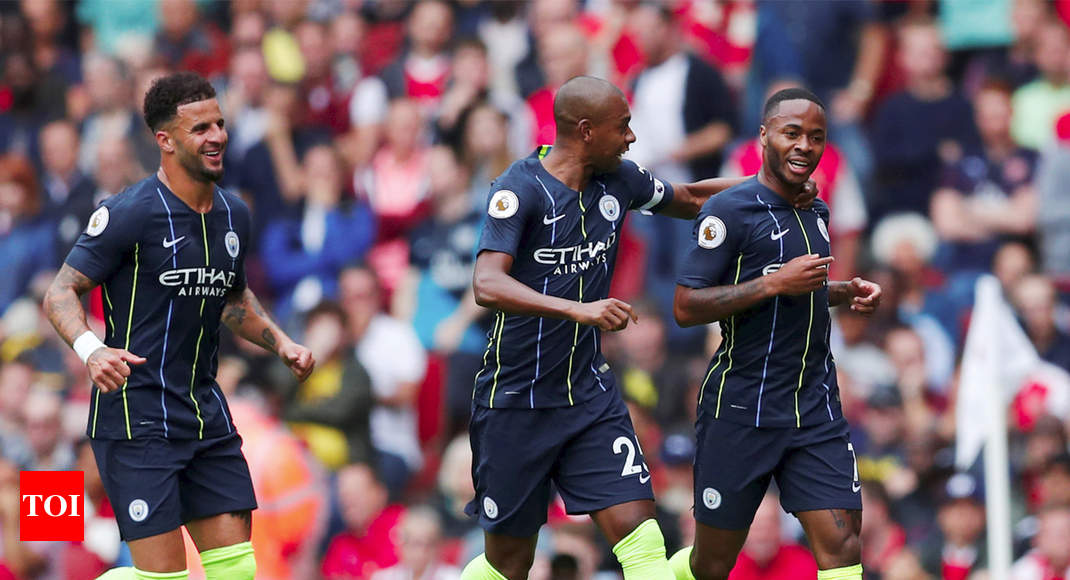 LONDON: Manchester City ruined the start of the Unai Emery era at Arsenal as the champions signalled their intent to retain the Premier League title with a stylish 2-0 win on Sunday.

Pep Guardiola’s side swept to the title last term with a record 100 points and they were quickly back in the groove at the Emirates Stadium.

Raheem Sterling opened the scoring with a clinical finish early in the first half and Bernardo Silva’s thunderous strike capped a City success that served as a resounding warning to their title rivals.

No team has successfully defended the English title since Manchester United in 2008-09.

But on the evidence of this composed display, City have every chance of emulating their rivals’ achievement.

Picking up where they left off last term, City had too much class for Arsenal and easily repelled the hosts’ few dangerous moments.

Arsenal were playing a competitive match without Wenger in charge for the first time since September 1996.

Emery was hired to replace Wenger following the Frenchman’s exit at the end of a dismal campaign which saw Arsenal labour to a sixth-place finish in the Premier League — 37 points behind City.

The Spaniard will need time to make his mark on a moribund club and, while Arsenal couldn’t be faulted for effort against City, there was precious little quality about their play.

Guardiola insists his players are still “starving” for success and there is little doubt City’s hunger for silverware remains strong.

The City boss started with Kevin De Bruyne and Leroy Sane on the bench as he recalled Sterling and gave a Premier League debut to Algeria winger Riyad Mahrez, whose move from Leicester was Guardiola’s only major close-season signing.

Sterling proved to be City’s creative fulcrum, but he was fortunate to escape with a yellow card for a studs-up foul on Arsenal debutant Matteo Guendouzi in the early stages.

The England winger showed the more pleasing side of his game with an incisive burst past Shkodran Mustafi that took him into the Arsenal area and ended with Petr Cech saving his rising drive.

Having spent the dying embers of Wenger’s reign subjecting the Frenchman to vitriolic abuse, Arsenal’s fans were energised by the sight of Emery on the touchline.

But that noisy optimism was punctured in ruthless style by Sterling in the 14th minute.

Taking possession on the left edge of the Arsenal area, Sterling glided past Hector Bellerin and Guendouzi before drilling a fierce shot that flashed past the unsighted Cech from 18 yards.

Arsenal still looked anxious and Cech almost scored a bizarre own goal when his miscued pass across the penalty area crept wide of his unguarded net.

Making amends for that blunder, Cech kept out a Mahrez free-kick before alertly recovering to block Aymeric Laporte’s effort from the rebound.

Arsenal were pressing with more urgency than under Wenger, but City looked far more potent and Mahrez went close with a curling effort at the end of a rapid break.

Emery has challenged Pierre-Emerick Aubameyang to finish as the Premier League’s top scorer after the Gabon forward netted 10 times in 13 games following his January move from Borussia Dortmund.

However, Aubameyang will need better service than he received against City to achieve that target.

Emery sent on Alexandre Lacazette soon after the interval and the France forward had an immediate impact, taking Aubameyang’s pass and shooting just wide.

City responded in emphatic fashion and Silva wrapped up the points in the 64th minute.

Sterling and Mendy outnumbered Bellerin on the right, with the French defender’s cross picking out Silva, who cleverly peeled away from his marker Stephan Lichtsteiner to fire past the exposed Cech.