A year ago, Manchester City were merely well-fancied to win the Premier League title. Today, they are indisputable favourites to defend it, while Manchester United – despite a second-place finish – are barely considered contenders. On paper, this city boasted English football’s two best teams last season and yet over the course of the campaign, its landscape shifted radically.

Alphabetical order separated the two at top of the table last September. By May, the gap was 19 points. 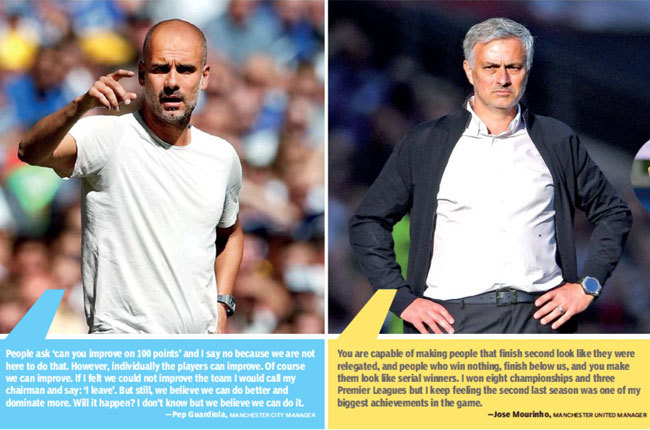 Four months on, Paul Pogba is open to leaving United because he does not feel supported by his manager. His manager, Jose Mourinho, is barely attempting to hide his discontent with the club’s inaction over transfers. The club, meanwhile, cannot claim that a largely untested midfielder, a teenage full-back and a third-choice ‘keeper represents a significant investment in the squad. The 19-point gap is not set to narrow but widen.

It is all a far cry from two summers ago, the time of Pep Guardiola and Mourinho’s appointments and a period of relative parity. Both City and United had one league title each since their final day head-to-head in 2012. Both had finished on 66 points the previous season – winning, drawing and losing the same number of games. A reset button had been pressed in the much-discussed ‘power struggle’, which began with Abu Dhabi’s takeover of City in 2008. Both Guardiola and Mourinho had a tabula rasa with which to work.

If there was a difference, and if one club was at a disadvantage, it was City. Guardiola’s vision and all-conquering style could not be immediately applied. It was only a year later, for example, that an ageing band of full-backs ill-suited to sitting and pressing high were jettisoned. Some of the initial business, meanwhile, was rushed and botched. Joe Hart was moved out on sound principles but his replacement, Claudio Bravo, proved disastrous. 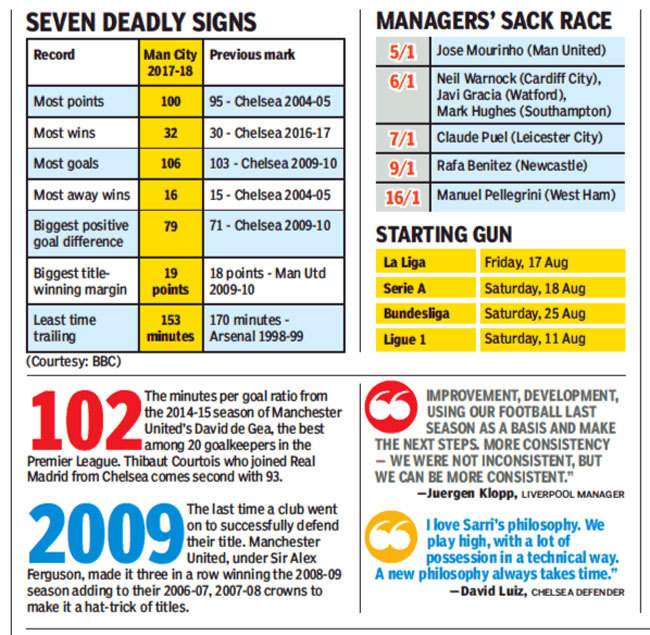 In retrospect, this was Mourinho’s time to strike. There was deadwood to clear at Old Trafford as well, but he had the ear of executive vice-chairman Ed Woodward and received additions in the four positions he outlined. Whether Pogba, Henrikh Mkhitaryan, Eric Bailly and Zlatan Ibrahimovic were the correct additions is a matter of opinion now influenced by hindsight, but Mourinho made few complaints at the time.

And yet, albeit with important successes in the Europa League and EFL Cup, United could only manage a sixth-place finish. City, who comfortably finished third, were Manchester’s superior team that year. In the most challenging campaign of his career, Pep finished nine points clear of Mourinho, all while building a platform towards greatness in the following season.

The Manchester ‘power struggle’ briefly threatened to exist at the start of last season. At the time of the October international break, City and United – having spent £201.5m and £145.8m respectively in the summer – were level on points and only separated by the number of goals scored.

Mourinho ceded ground, however, by playing a parody of anti-football to draw at Anfield later that month. A similar approach was punished at Stamford Bridge a few weeks later, with Chelsea winning 1-0, but a woeful defeat at Huddersfield Town in between those two trips provided perhaps United’s worst performance of the season and put City in the ascendancy.

It is a sense of conviction, authority and impregnability about City that Mourinho is tasked with dismantling. United could hardly be less prepared.