Samara: There is no dressing room gossip, no public spat, no whirl of criticism back home and no hooligans poisoning the excitement of the drama surrounding the World Cup in Russia. But England are still there in Moscow, preparing for their first knockout game against Colombia on Tuesday.

Like their ranking, England have stayed lukewarm in this theatre of the absurd that’s going on for the last couple of weeks. Even a 6-1 drubbing of Panama with a Harry Kane hat-trick didn’t really entice the fans back home or in Moscow.

It is a different England, if not new, that the world is witnessing. The team’s coach, Gareth Southgate, doesn’t boast of a CV to die for. He doesn’t tick the boxes like Roy Hodgson or Graham Taylor did, only to suffer a flat tire. 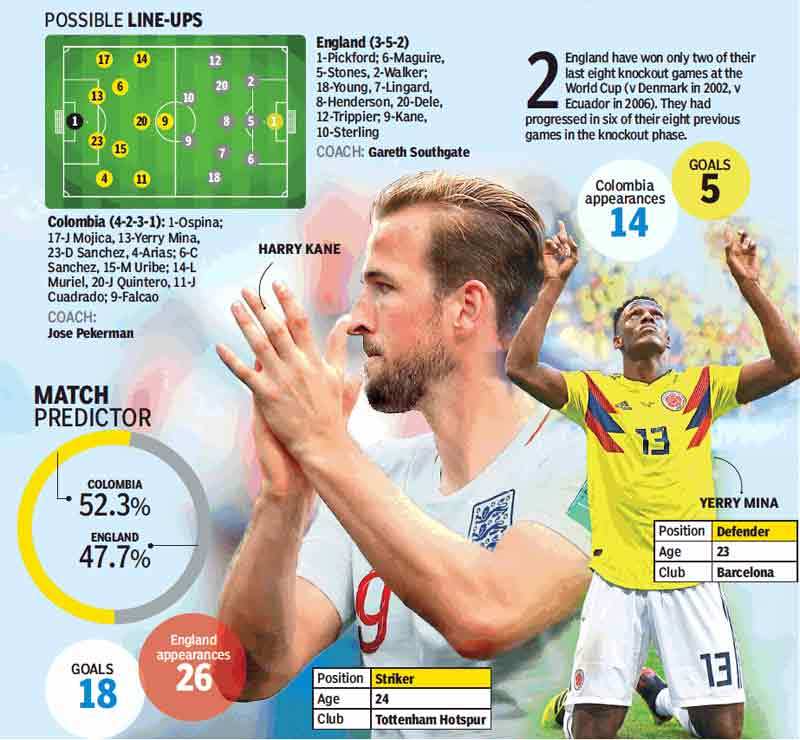 Having chosen to keep radio traffic to a minimum, Southgate is showing he has abandoned sarcastic outpourings since the day he last played for England. It was the summer of 2002 and England were knocked out by Brazil. Later, Southgate said of coach Sven-Goran Eriksson, “We were expecting Winston Churchill and instead we got Iain Duncan-Smith.”

Since being promoted to the hot seat, Southgate has practised caution in what he says. In Russia, he gave only routine quotes when the Tottenham striker and captain netted a hat-trick. Things didn’t go out of hand and he made the team realise that it was just Panama and there was no need to jump off the cliff.

Going for a total overhaul against Belgium, since qualification had been already ensured, Southgate showed he is ready to lose and cop criticism for achieving something better. Now, it is his chance to put his ideas into action against Colombia, who might be without James Rodriguez, their captain and best player.

The Bayern Munich playmaker has been suffering from a calf strain that prevented him from training after their victory over Senegal which secured them a place in the Last-16. Even if he is not fully fit, Rodriguez won’t give up the opportunity to lead his team. Rodriguez and Radamel Falcao provide the Los Cafeteros – built around a stubborn defence – the inspiration up the park.

England’s defence, particularly their flanks, will have to contend with the playmaking Juan duo – the speedy Cuadrado and slippery Quintero. With a goal and two assists, River Plate midfielder Quintero has caught the imagination of the fans and suitors alike. His more defensive partner and Spurs midfielder Davion Sanchez’s duel with Kane will provide a juicy sub-plot. Sanchez would know that sharing Kane’s nuances with his teammates is one thing but stopping the leading scorer of the tournament is an altogether different task.

His coach Jose Pekerman, the only surviving among five Argentinian coaches who came to Russia, was hugely worried over Rodriguez’s injury after the Senegal game. “It is a difficult situation for us,” he said. Four years ago, Colombia’s chances suffered a blow when Falcao suffered a ligament injury and could not take the flight to Brazil. It was Rodriguez who stepped up and his self-defining volley against Uruguay at the Maracana salvaged Pekerman’s pride. Four years on, Colombia are once again in a tricky situation without the talismanic Rodriguez.