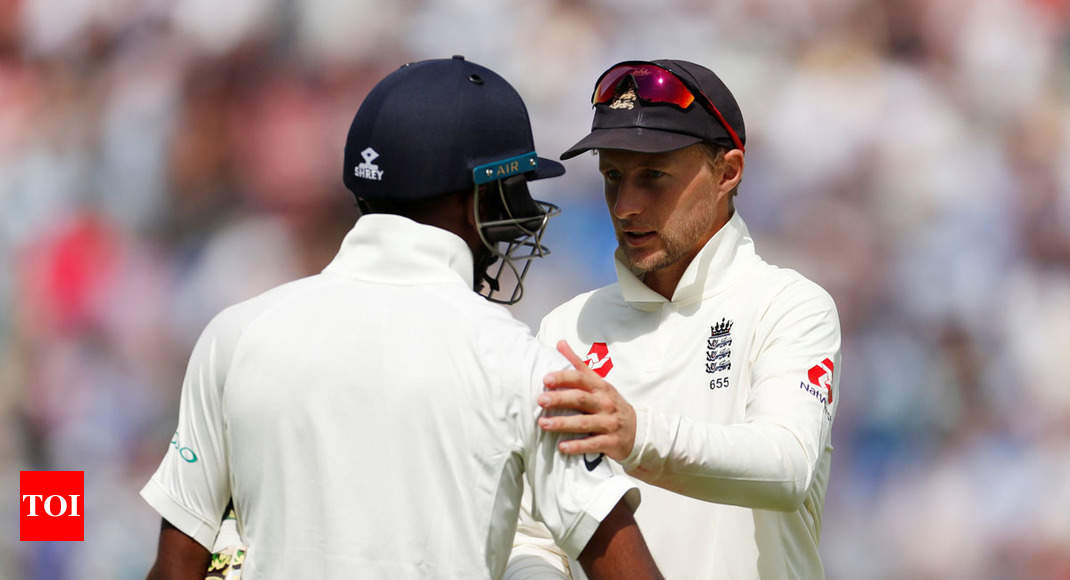 BIRMINGHAM: England captain Joe Root on Saturday said the see-saw opening Test against India was a great advertisement for cricket’s traditional format and urged the cynics to watch the game on replay.

The Edgbaston match was the England men’s team’s 1000th Test.

“Fabulous advert for the game of cricket, isn’t it? Anyone that says it’s dead can just come and watch this on repeat. What a game,” Root said at the post-match press conference.

England beat India by 31 runs after they successfully defended 194, claiming early lead in the five-match series.

“This morning we spoke about showing the belief and desire that we had done in the previous three days. If we stayed calm and trusted all the previous areas we’d been bowling, then we’d get our rewards.

“I think we did just that, so I’m really proud of the group. It sets the series up nicely and looking forward to Lord’s now,” Root said.

Like Ravichandran Ashwin in the opposite camp, the English skipper too defended his batsmen, saying that the conditions were suited to pacers in the game and that both bowling attacks exploited them well.

Root said that although England got a few things wrong, they never let go of the belief to win.

“We knew wickets were going to be quite crucial. But the way that this Test match had gone to that point, it always seemed that if you took one wicket, you were going to get two or three.

“We always felt like we were in the game and the ball swung throughout. Credit to both bowling sides actually, India’s attack and obviously ours. We exploited that really well, made it very difficult for all the batsmen on that surface.”

Batting did seem difficult on an Edgbaston surface that had quite a lot for the bowlers.

“I think it’s sometimes easy to criticise the batting group but I thought the way both seaming groups in particular bowled was outstanding and hence why we finished so quickly.

“It was a great surface that made for some great Test cricket and I think it’s important that you don’t underestimate how well people have bowled on there,” said Root.

He lauded the players for showing determination in tough situations.

“Wherever you play in close games like this, you desperately want to be on the right side of it for so many reasons. But one thing that really stands out for me is that inner drive and determination from this group of players.

“We’ve got a few things wrong within this game but we’ve kept that belief, we’ve kept that confidence within one another and I think that’s a big part of Test cricket. That gives us a great amount of confidence going into the rest of the series as well,” he added.

India began day four needing 84 runs for victory. Virat Kohli’s 51 went in vain as Ben Stokes took 4/40 in the second innings along with 2/73 in the first innings.

Talking about England’s game plan for this second innings, Root said that he wanted to cut off runs for the batsmen and the hosts knew that one wicket would lead to two or three given the conditions.

“I was thinking of making sure we didn’t give any boundaries away and made it very difficult for them to score freely. But ultimately, we’ve seen throughout this game that the ball has moved around, so if we put it in the right areas for long enough, we’d get our rewards. I thought the two big lads, Stuart Broad and James Anderson, set the tone very nicely.”

“… From there, the rest of the guys did exactly what was asked of them. I spoke to the boys at the start and said, ‘Just go out there with that belief, desire that you have done the previous two days in the field’, and they didn’t disappoint.

“I couldn’t be prouder of that. That’s all you can ask as a captain, the guys to do as you ask, and under pressure to stay as calm as we did. I think that’s really good for us as a team and sets us up nicely moving into the next Test,” said Root.

The English skipper was also full of praise for 20-year-old all-rounder Sam Curran who took five wickets in the game but more importantly set up the win with his maiden Test half-century in the second innings.

“The reason Sam’s played is firstly for his performances that he’s put in for Surrey. He’s made some big contributions for his county side and a big part of that team.

“Whenever he’s been around, whenever you watch him operate on the field, he has this desire and steeliness within him which, similar to Ben, wants to be involved in the big occasions and that obviously suits playing in Test match cricket, and you’ve seen that throughout this game.

“That was a fantastic performance to come into his second Test match under pressure against the number one Test team in the world and play like that. As a side going into a five-match series like that should fill him with a huge amount of confidence for the rest of this series.”