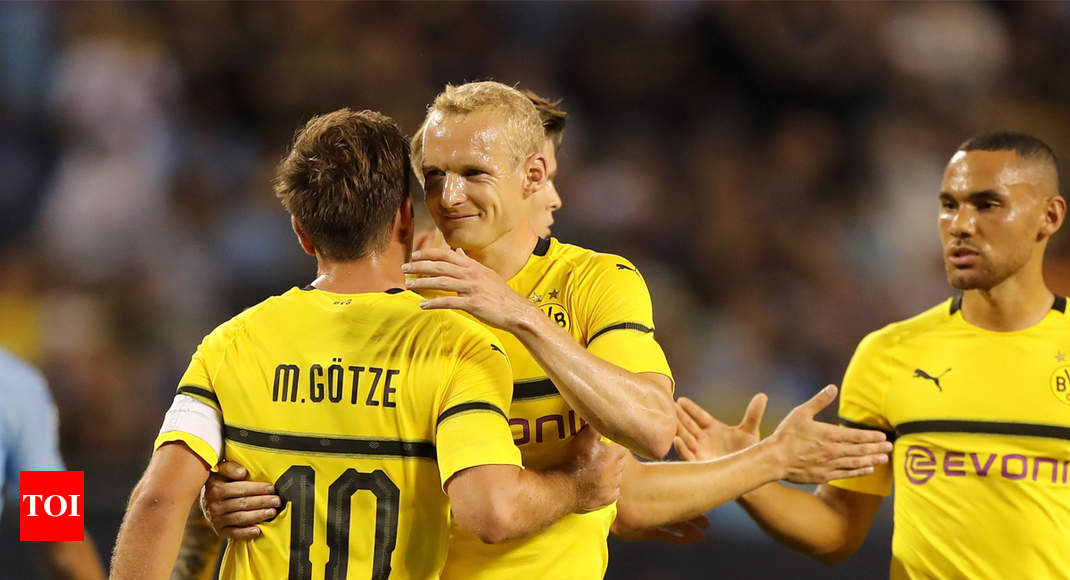 CHICAGO: Pep Guardiola’s start to his pre-season campaign ended in defeat as Borussia Dortmund captain Mario Gotze’s first half penalty was enough to see off the Premier League champions Manchester City 1-0 at Soldier Field in Chicago.

Guardiola was able to call on the likes of new signing Riyad Mahrez and German Leroy Sane but his otherwise highly inexperienced, young team were unable to get the better of a Dortmund side who have already played one game this summer and looked far sharper in the opening match of this year’s International Champions Cup tournament.

Gotze’s winner came in the 28th minute when American international Christian Pulisic was hauled down in the box allowing the midfielder who famously scored the winning goal in the 2014 World Cup final to beat Claudio Bravo.

Mahrez showed flashes of his quality yet Guardiola will be disappointed about the lack of cutting edge on show.

With the bulk of his Premier League title winning squad enjoying an extended break after their exertions at the World Cup, it was a vastly inexperienced squad sent out by the Spaniard at Soldier Field.

Mahrez, the $75 million signing from Leicester, made his debut while the precocious young English midfielder Phil Foden also started.

There was a healthy crowd of 34,629 inside Soldier Field and although a young City side held their own early on, Dortmund created the better chances with Gotze pulling the strings together with Pulisic.

Mahrez was City’s best player, a decent run and cross midway through the first half showcased his attacking threat.

But on 28 minutes, the Germans were ahead. Alex Zinchenko, who is set to leave the club before the start of the English domestic season, brought down the lively Pulisic in the box and Gotze beat Bravo from the spot before Alexander Isak almost made it two soon after.

Jack Harrison should have done better just before the interval when he miscued a shot from close range and them Mahrez forced a great save from Dortmund keeper Marwin Hitz.

Nevertheless, Guardiola would have been all too aware of his side’s lack of killer instinct.

Former Etihad starlet Jadon Sancho, who quit the Premier League club for Dortmund last August following a fall-out with Guardiola, was introduced in the second half and began promisingly.

Joe Hart, the former England keeper, was making his first City appearance since August 2016 but it was opposite number Hitz who was almost beaten on 55 minutes when another Mahrez set-piece flew just past the post.

The Algerian’s cute pass set Lukas Nmecha through on 70 minutes but his finish was lacking before Hart produced an excellent point blank save to deny Mahmoud Dahoud.

Dortmund, however, held firm to seal a deserved win.