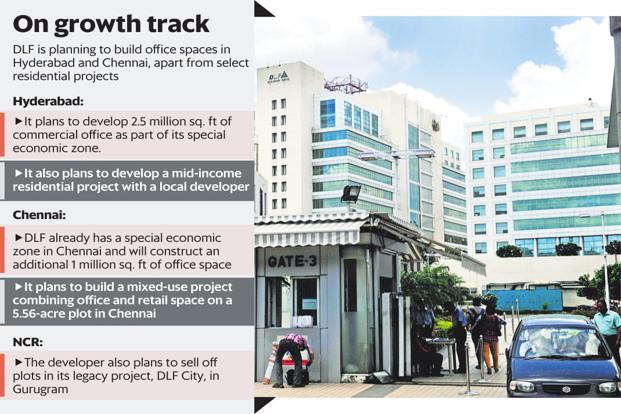 In Chennai, DLF already has a special economic zone (SEZ) and will construct an additional 1 million sq. ft of office space. Graphic: Mint

Bengaluru: India’s most valuable real estate firm DLF Ltd is planning to return to Hyderabad and Chennai, stepping out of its home market of National Capital Region (NCR), to develop new office and residential projects, a top executive said. The move follows the company achieving break-even in operating cash flow in the June quarter. After nearly eight quarters of spending more than cash inflows, DLF expects to start generating free cash flows from the December quarter.

In the medium term, it will invest some of this into new projects.

In Hyderabad, it plans to develop 2.5 million sq. ft of commercial office as part of its special economic zone.

It also plans to develop a mid-income residential project with a local developer.

In Chennai, DLF already has a special economic zone (SEZ) and will construct an additional 1 million sq. ft of office space. After long negotiations, a 5.56-acre plot in Chennai that DLF had bought from the Madras Race Club (MRC) for ₹360 crore this year, recently got permission to be converted from leasehold to freehold.

DLF plans to build a mixed-use project combining office and retail space on it.

“DLF has taken a pragmatic approach and in 2018-19, we set upon ourselves certain balance sheet metrics in terms of debt and cash-flow management. In terms of free cash flows, the plan is to invest 50% of it towards developing new assets, both commercial and residential. However, we are not getting into a land buying spree,” Chawla said.

Office space in Hyderabad and Chennai, once built, will be transferred to DLF Assets Ltd (DAL), which is now a part of its rental arm DLF Cyber City Developers Ltd (DCDDL), as per an earlier agreement.

DLF is also in talks with private equity funds to raise around ₹750 crore to make certain payments with a 11.76 acre land it bought earlier this year from Haryana State Industrial and Infrastructure Development Corp. (HSIIDC) for around ₹1,500 crore. The land, which is close to DLF Cyber City, was a strategic purchase for the developer which wants to form an equal equity shareholding partnership with an investor.

“The deal will be closed in the September quarter but project development will start only in the next financial year. The capital raised will be used for land payment, stamp duty and other government charges,” said Chawla.

The developer also plans to sell off plots in its legacy project DLF City in Gurugram.

In December, 2017, DLF concluded the sale of 33.34% stake in its rental arm DCCDL to sovereign wealth fund GIC for around ₹9,000 crore. DCCDL, a joint venture with GIC, will act as a ‘business trust’ expected to double the size of its portfolio from existing 27 million sq. ft over the next decade.

DLF, which has been following a build-and-sell model for its residential projects, plans to sell down its existing, ready inventory valued at ₹13,500 crore over the next five to six years, as it builds fresh inventory of finished projects, the company said in an analyst presentation during the weekend.

The QIP, expected to be concluded in the second half of 2018-19, will yield a significant amount and the conversion of warrants issued to promoters into equity shares by June 2019 would lead to an inflow of ₹2,250 crore for DLF.

“…Timely conclusion of these transactions and the total quantum raised should further support the cash flows of the company and significantly improve its capital structure while strengthening its credit risk profile,” Icra noted.

On Friday, DLF reported a 56% increase in its net profit to ₹172.77 crore for the April-June period compared with the corresponding quarter a year ago. Its total income, however, dropped 25.03% to ₹1,657.67 crore in the first quarter, during the same period.