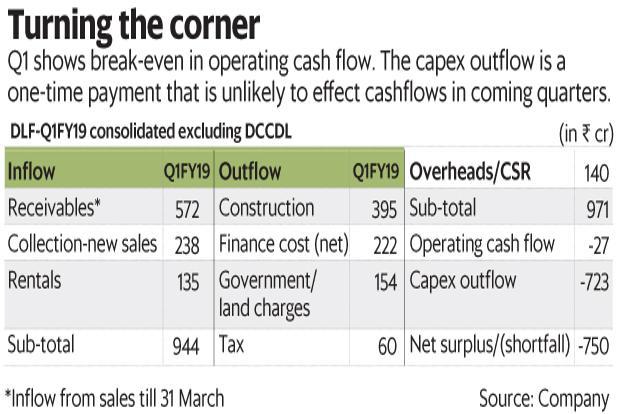 DLF Q1 results show break-even in operating cash flow. The capex outflow is a one-time payment that is unlikely to affect cash flows in the coming quarters. Graphic: Mint

After a painful FY18, DLF Ltd’s June quarter (Q1) results come as a harbinger of better days. The largest realty conglomerate achieved operating break-even, even as it strives to heave itself out of the quagmire of debt that nearly devoured it. To be sure, the revenue and profit figures for the quarter show a glaring decline from the earlier quarters. However, note that this is the first full quarter where realty firms would feel the impact of the new Indian Accounting Standards (IndAS 115). Under this, only revenue and profit from projects where the possession (ownership) is transferred to the customer can be recognized in the profit and loss statement. Hence, Q1 necessitated a huge ₹ 5,383 crore reversal of profit from earlier quarters.

This impacted DLF’s profit and loss statement. Q1 revenue receded by 26% and the Ebitda (earning before interest, taxes, depreciation and amortization) dropped to a third of what it was a year ago. But this is not worrisome. It will come back into the profit stream over the next one or two years as ownership of projects passes on to customers.

In an ICICI Securities report analysing the results, analyst Adhidev Chattopadhyay said, “With the introduction of IndAS 115 from Q1FY19E, accounting shift to the project completion method as opposed to the percentage completion method will continue to skew reported financial performance and hence we believe that investors should look to focus on cash flows as accounting complexities will continue to remain.”

It is here that DLF scored. In Q1, it achieved break-even in operating cash flow (see table). The overall cash flow was dragged by ₹ 723 crore one-time payment (capex), towards land purchases.

Meanwhile, the quarter’s new sales bookings of ₹ 600 crore raises investor hopes of DLF achieving the guided ₹ 2,000-2,250 crore for FY19, putting it back on the growth track. On another note, DLF’s strategy to put new launches on hold in FY18 and divert all resources towards completing existing projects is paying off. The focus is to sell “built-up” projects both in the residential and commercial domain. Alongside this, it would wind down its existing inventory of ₹ 13,500 crore. The analysts’ presentation highlights recovery in the Gurugram market that is mirrored in quarters-to-sell inventory, which is down from 19 quarters previously to 13 quarters.

However, any adverse impact from rising interest rates in the country may hit performance.

Be that as it may, the firm’s profit reversal led to a loss during the quarter. However, strong profitability in its associate DLF Cyber City Development Ltd (DCCDL) came to its rescue. The 67% share in DCCDL’s profit amounting to ₹ 254 crore lifted the consolidated net profit to ₹185 crore.

According to the management, future profits would accrue from new sales, rental revenue in the parent, the 67% share in DCCDL profit and as the ₹ 5,383 crore reversal flows back.

Meanwhile, the company would like to further whittle down existing debt that is already significantly lower, with a target of zero-debt in the listed entity by FY19. If all these forces come together, improved performance would continue to support DLF’s stock price that has in the recent past been north bound.