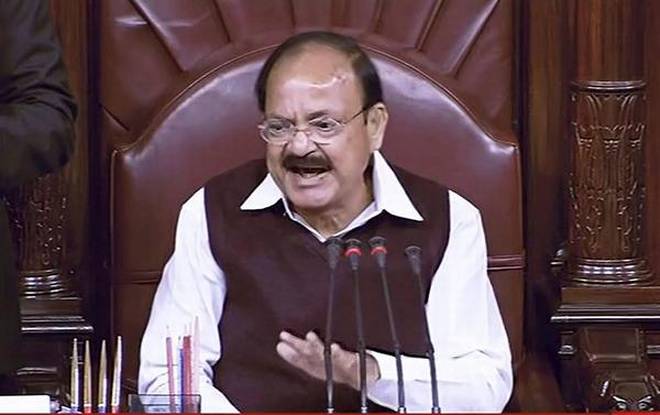 The Winter Session of the Parliament came to a close on Friday, with Chairman of the Rajya Sabha M. Venkaiah Naidu praising its Members for crossing party lines to register their concerns in the matter of Kulbhushan Jadhav meeting his family in Pakistan.

“A high point of the session was the way in which all sections of the House spoke in one voice in a restrained way regarding Kulbhushan Jadhav meeting his family members in a Pakistani jail. This has been an exemplary case of Members going beyond party lines on larger issues of calm and concern,” said the Chair in his closing remarks.

He also bestowed praise on the Members for solving the issue raised by the Opposition on Prime Minister Narendra Modi’s remarks about former prime minister Dr. Manmohan Singh and former vice president Hamid Ansari during the Gujarat election campaign.

“This session of the House had its highs and lows — the high point being that both sides of the House have reiterated their commitment to respect and uphold the high office of the Prime Minister, the former Prime Minister and other dignitaries. I sincerely hope that this spirit prevails in the future,” he stated

Opposition MPs in both Houses had raised slogans and caused disruptions after Mr. Modi, in a rally in Gujarat, implied Dr. Singh held a “secret” meeting with Pakistani officials in Mani Shankar Aiyar’s residence in a bid to influence the elections.

This led to repeated adjournments, especially in the Rajya Sabha, with Opposition Benches demanding an apology from the Prime Minister. The Chairman then asked both sides to put the House above their politics, leading to reconciliation.

The Bhima-Koregaon violence and subsequent clashes in other parts of Maharashtra also caused much consternation, with Members demanding a discussion on the topic. While the discussion did not take place, Members instead chose to utilise the Zero Hour as a platform to condemn the violence.

Mr. Naidu reminded Members that while intense debates are the order of democracy, disruptions are not.

“We are all important participants in the polity of our country. However, all of you would agree with me that, though the Parliament is a political institution, it cannot be an extension of politics in its typical sense which is marked by deep divisions and acrimony,” remarked the Chair.

The Muslim Women (Protection of Rights on Marriage) Bill, 2017, also known as the triple talaq Bill, was passed in the Lok Sabha, but the Opposition in the Rajya Sabha was united in its stand to send the Bill to a Select Committee for a review. This led to an impasse in the House, with government refusing to accede to the Opposition’s demand. The Bill will be re-introduced in the Budget Session.

The House also deliberated on the state of the economy and employment generation, and high levels of air pollution in Delhi.

In the four days that Question Hour was taken up, 46 starred questions were orally answered. 51 Members made Zero Hour submissions and 50 Members made special mentions on matters of public importance.

The House lost 34 hours of working time, as against 41 hours of business transacted. “It is unfortunate that despite discharging its responsibilities, this august House ends up losing some degree of esteem with the people on account of disruptions and substantial loss of functional time,” said Mr. Naidu.

It was also in this session that for the first time in 15 years Question Hour got completed in the House, on January 2, 2018.

In the Lok Sabha, which too had 13 sittings this session, 12 government Bills were passed. The House had 61 hours of working time with 78 per cent productivity. 16 Bills were introduced and 46 starred questions were orally answered.

In her final speech for the session, Speaker Sumitra Mahajan thanked the Prime Minister, the Treasury and the Opposition Benches for smooth functioning of the House.