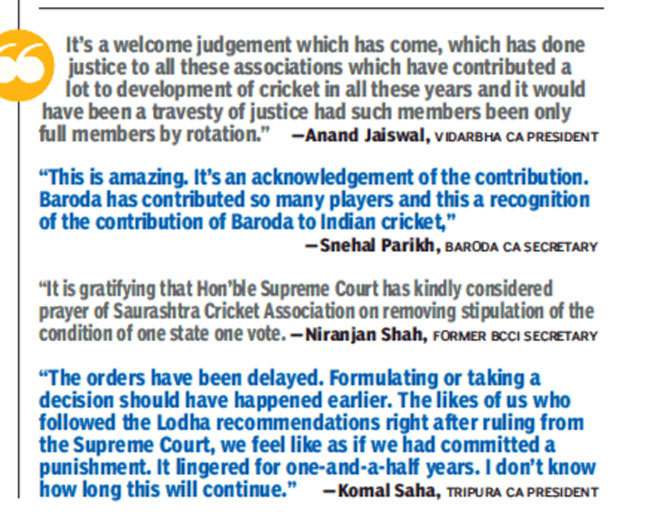 NEW DELHI: “They were core recommendations. Very significant points which really wanted to bring a lot of independence in the working of BCCI and usher in accountability and transparency. It was also about maintaining balance of power among the members,” lamented Justice (retd) RM Lodha on the dilution of his committee’s recommendations.

“So all the ills which we wanted to eradicate by recommending these reforms, they have been diluted. It was a full package of reforms and it was intended to give a very strong administrative and governance structure to the BCCI. If you pull out a few important bricks from that strong structure, it is bound to affect its strength and that is what has happened,” Justice Lodha told TOI on Thursday.

Lodha said it was sad to see the government getting into BCCI through the back door. “We just wanted to ensure that the government doesn’t have any role in these autonomous bodies – the autonomy of the BCCI. Now these three – Railways, Services and Universities – will have votes and that will make a huge difference in the BCCI affairs. Whenever there is a tight contest these votes may tilt the balance. This could lead to a lot of manoeuvring, manipulation and machinations,” he said.

Lodha said that they wanted to end monopoly in the BCCI. “The very idea of actually breaking the monopoly of these office-bearers is now weakened because for two consecutive terms these officebearers can now contest.”

“Thirdly, one state-one vote. The idea was to keep all the states at par. With these two Western states, Maharashtra and Gujarat, having six votes the entire election will have a different colour. They will have a dominate role to play with six votes as they will have a lot of bargaining power,” he said.

Justice Lodha said it was a very disappointing day for him. “I don’t feel betrayed but am disappointed as we had put in so much of work and labour and the Supreme Court had accepted the recommendations on July 18, 2016. As a judge and man of law, I am more interested in knowing what legal principles have been actually applied by the Supreme Court in changing its own order which had a finality to it.”

“I am figuring out the legal principles which have been applied by the Supreme Court in modifying the final order which was passed on 18th July,” he said.