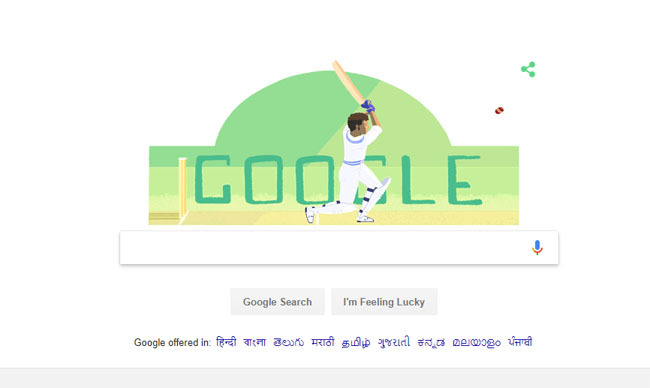 NEW DELHI: Often regarded as Indian cricket‘s ‘Renaissance Man’ and the best batsman against spin bowling, Dilip Sardesai was on Wednesday commemorated with a Google Doodle on his 78th birth anniversary.

Sardesai is famously remembered for the integral role he played in the watershed year of Indian cricket, when in 1971 he scored 642 runs, including three centuries and a highest of 212, and helped India script their maiden Test series win in the West Indies.

It’s been reported that he was lucky to be selected for the tour before making it one of his most memorable overseas outing.

Later that year, the Goa-born Mumbai cricketer was also part of the Indian team that went on to win its first Test series in England. Sardesai scored 54 and 40 in India’s two innings of the Oval Test. Leg-spin legend Bhagwat Chandrasekhar then claimed 6/38 to dismantle the hosts for the famous victory.

Sardesai’s celebrated career spanned 30 Tests, in which he scored 2001 runs at an average of 39.23, including five centuries and nine fifties.

He made his debut against England in the 1961 Kanpur Test and played his last international innings against the same opposition in 1972 during the Delhi Test.