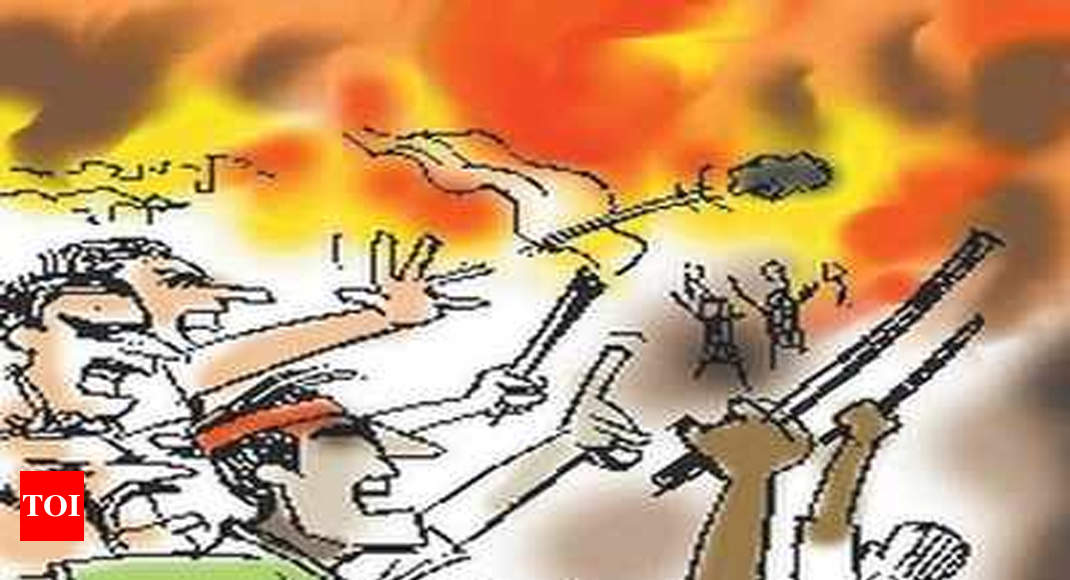 RAINPADA (MAHARASHTRA): The mob, which lynched five tribals here on Sunday night on suspicion of child lifting, was not satisfied with their killing and wanted the bodies to be burnt on the spot, according to the police.

The victims belonged to the nomadic Nath Gosavi community who move from place to place in Maharashtra in search of food and work.

According to police officials and locals, the victims were first attacked by a group of “highly inebriated” people in Kakar pada, a village adjoining Rainpada village, in Dhule district and were brought here while being continuously thrashed along the 1-km stretch.

The tribals had arrived on the night of last Saturday and had planned to go to the police station on Sunday to register themselves.

Whenever this community visits a village, they report to the local police station about their stay.

According to videos which went viral, one of the five victims apparently tried to speak to a six-year-old girl after which they were pounced upon, stoned and thrashed with sticks and chappals.

The provocation was apparently the rumours on social media which suggested that a gang of child-lifters was active in the area.

The police received a distress call at around 11 am on July 1 and they reached the spot around 12 pm, a distance of around 40 kms, said Assistant police inspector Yogesh Khatkal of Pimpalner police station.

He said there was a crowd of about 3000 people when they reached the incident site.

“When we reached there, all the five were dead,” he said.

There was so much of anger in the mob that they tried to prevent the police physically from taking custody of the bodies, said Khatkal, who was one of the five police personnel injured in the fury.

“They wanted the bodies to be burnt there only,” the police official said.

He said 23 people have been arrested in the case so far.

Sakharam Pawar, a former sarpanch of Rainpada, described the sequence of events on the fateful day.

He said that around a dozen people had caught hold of the five persons after they saw them dressed in attires not commonly associated with the Nath Gosavi community.

Nath Gosavi is a nomadic community from Maharashtra. They live on what people offer to them. People from this community not only roam in Maharashtra in search of food, work, they also travel to other states.

“The villagers saw the men, who were dressed in strange attires, offering biscuits to small children. This aroused suspicion that they wanted to kidnap the children,” Pawar said.

He said messages were already being spread on WhatsApp about children being kidnapped and killed by outsiders and their kidneys sold.

Pawar said the five men, suspected to be kidnappers, were beaten up at Kakar pada village and were brought to Rainpada, which is a distance of a little over 1 km.

“They were being continuously beaten on the way,” he said.

Vishwas Gangurde, another villager, said when the five men were brought to Rainpada, the villagers tried to intervene and asked people of the adjoining villages to let them give their version.

“The men were then taken to the panchayat office, where the villagers asked about their antecedents and what they were doing with the children. As they had been thrashed badly, they were only half awake,” he said.

“While they were being questioned, some youth in a highly inebriated state, egged the gathered crowd to not believe what the five men said,” Gangurde added.

“The mob then broke the door and windows of the panchayat office and started thrashing the men, which resulted in their death,” he said.

“None of these drunk youth, who egged the mob to kill the victims, were from Rainpada…Just 2-3 of them were from our village,” he claimed.

He said the Sunday market here attracts people from over 20 villages.

Another officer from the police station, requesting anonymity, said five teams have been formed, which are looking for other people involved in this lynching.