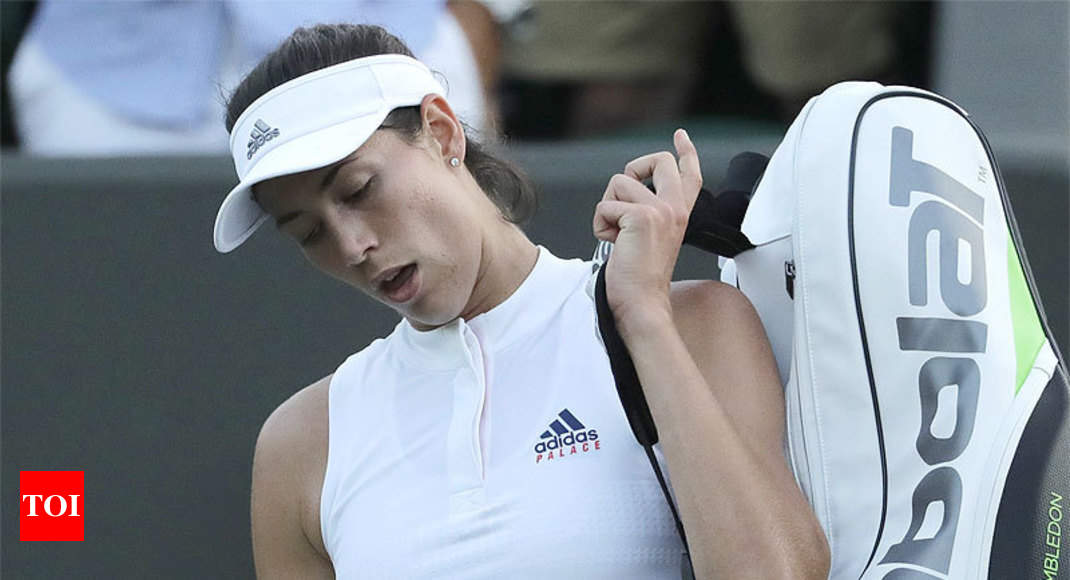 LONDON: Defending champion Garbine Muguruza was sensationally knocked out of Wimbledon by journeywoman Alison van Uytvanck on Thursday, leaving just one of the top six seeds left after only two rounds.

In the men’s event, third seed and last year’s runner-up Marin Cilic was knocked out by Argentina’s Guido Pella.

Fourth seed Alexander Zverev was teetering on the brink of defeat when he trailed Taylor Fritz of the United States by two sets to one when their second round tie was suspended for the night.

Elsewhere, Rafael Nadal overcame two time warnings and Novak Djokovic shrugged off a knee problem to battle into the third round.

“I knew that if I let her play, I would lose so I thought, let’s go for it,” said 24-year-old Van Uytvanck, who has made the third round for the first time.

“I may have looked calm but inside I was dying.”

Muguruza admitted it had not been her day.

“She played big, took risks and it worked for her but my level was not where I wanted it to be,” said the deposed champion.

Djokovic, the three-time champion, needed treatment on his left knee on Court Two but still had too much for Argentina’s Horacio Zeballos, winning 6-1, 6-2, 6-3.

Djokovic has now made the third round for 10 consecutive years and will face British 21st seed Kyle Edmund.

When rain forced the tie to be postponed on Wednesday, Cilic was leading by two sets against an opponent who had never won a match at Wimbledon before this year.

But the Croatian collapsed once the match resumed on Court One on Thursday and Pella took full advantage to set up a third round clash with Mackenzie McDonald of the United States.

Cilic, the 2014 US Open champion, had been expected to mount a strong challenge for the Wimbledon title after winning the grass-court warm-up at Queen’s Club two weeks ago.

But his defeat is good news for defending champion Roger Federer, who was on course to face Cilic in the semi-finals.

“Yesterday he was playing so good, hitting the ball so hard that I couldn’t do anything,” Pella said.

“So the rain helped me a lot. Today I played differently, tried to be more aggressive, he started to feel uncomfortable.”

Nadal, the 2008 and 2010 champion, was tested by world number 77 Kukushkin who was made to pay for converting just two of 13 break points.

He was also hit with two time violations — one before the match had even started as he sat courtside.

“I didn’t know but I don’t see a clock here. I don’t see a countdown. It’s more difficult for me to understand what’s going on,” said 11-time French Open champion Nadal, who is chasing an 18th major.

For Djokovic, meanwhile, victory was his 60th at Wimbledon.

Former world number one Djokovic shrugged off a knee injury he suffered in the match.

“It’s most likely a twitch in the muscle or something like this that has affected the knee a little bit. Hopefully it’s nothing that will concern me,” said Djokovic.

Three-time major winner Stan Wawrinka was unable to follow up his first round defeat of sixth seed Grigor Dimitrov when he lost 7-6 (9/7), 6-3, 7-6 (8/6) to Italian qualifier Thomas Fabbiano.

Fifth-seeded Juan Martin del Potro, who made the semi-finals in 2013, eased past 36-year-old Feliciano Lopez, a three-time quarter-finalist, who was playing in a record 66th consecutive major.

French Open champion Halep reached the third round with a 7-5, 6-0 win over China’s Zheng Saisai and next plays Hsieh Su-Wei of Taiwan.