In Brazilian football, defenders are often dismissed as perna de pau or wooden legs, referring to players who can’t dribble. In the land of jogo bonito, where the game expresses itself through silken footwork, sublime skills and amazing goals, what would encourage one to take up the job of standing behind the showmen and guarding the fort?

Well, they are the alma or soul of a team — that is how Brazilian coach Tite often responds to such queries. Therein lies the essence of the 57-year-old’s football philosophy. On the stage of Neymar’s theatrics, Tite has deliberately and devastatingly broken the stereotypes in building his success formula with a bunch of defenders who look committed to a collective cause, blending their attacking ambitions with rearguard resilience.

This is in stark contrast to their infamous 1-7 defeat to Germany four years ago. This is a rebranded and reformed Brazil, ready to exorcise the ghost of Mineirazo.

Tite never played for the Selecao, nor does his managerial CV mention any job in Europe. But the man is known to possess a curious mind. When he was in charge of Internacional in 2008-2009 season, Argentine midfielder Andres d’Alessandro, who played briefly of Portsmouth, played under him. The Argentine told him about the compactness of European teams, which ignited his mind so much that he went on a European tour, studying teams from Pep Guardiola’s Barcelona to Ancelotti’s Real Madrid to Wenger’s Arsenal and came back home with fresh ideas. He introduced a new system in his Corinthians side, which in 2011-12 won the Brazilian and South American titles and beat Chelsea in the Club World Cup final. That is still a talking point in Brazilian football. 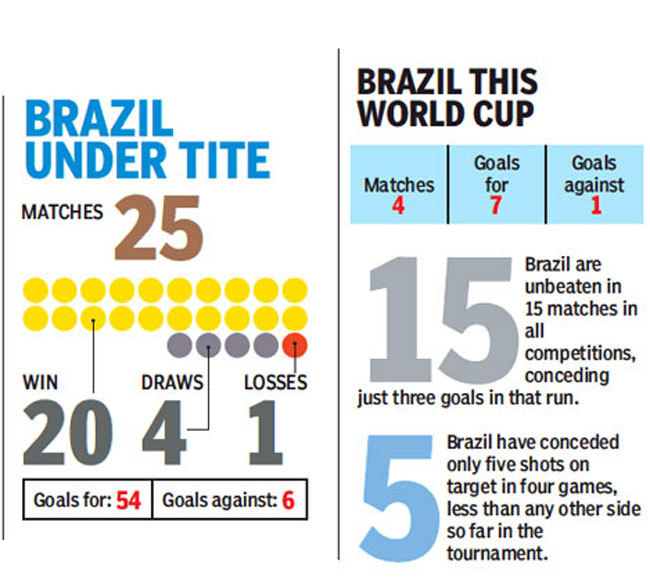 When Tite took charge of the Selecao in June 2016, Brazil were living under the shadow of that humiliation in Bello Horizonte and were struggling in the World Cup qualifiers. His first job was to transform Neymar and Co. into a coherent unit like the Corinthians. The worry over the national team’s survival quickly vanished when they became the first team to confirm a flight to Russia.

At Corinthians, Tite was a 3-5-2 specialist whose team was known for single-goal victories. But his education from that European tour taught him to be more flexible, and he infused more pragmatism, potency and promise into the Selecao.

In Scolari’s Brazil in 2014, the team used to operate on flying fullbacks (Dani Alves and Marcelo) while two holding midfielders in front of the centre-backs were tasked with the job of replenishing the gap on the flanks if needed.

Under Tite, however, the new Brazil revel in three key positions — a holder, a playmaker and a box-to-box raider. This allows the team to change formations frequently during the match, no longer overreliant on Neymar. Against Mexico in the last-16 clash on Monday, this system was much in evidence. What grabbed more attention, however, was the way the defence stood up to the challenge against a marauding Mexico early on.

Fagner, who replaced a yet-to-recover Marcelo, was less adventurous while Felipe Luis, schooled in the art of marking under Diego Simeone at Atletico Madrid, was exceptional as a holder. The defensive backbone of Miranda, also a former student of Simeone’s school, and Thiago Silva remained firm as usual, denying Mexico any real space to manoeuvre.

And once those troubles were negotiated, Brazil left it for Neymar and others to turn on the style. 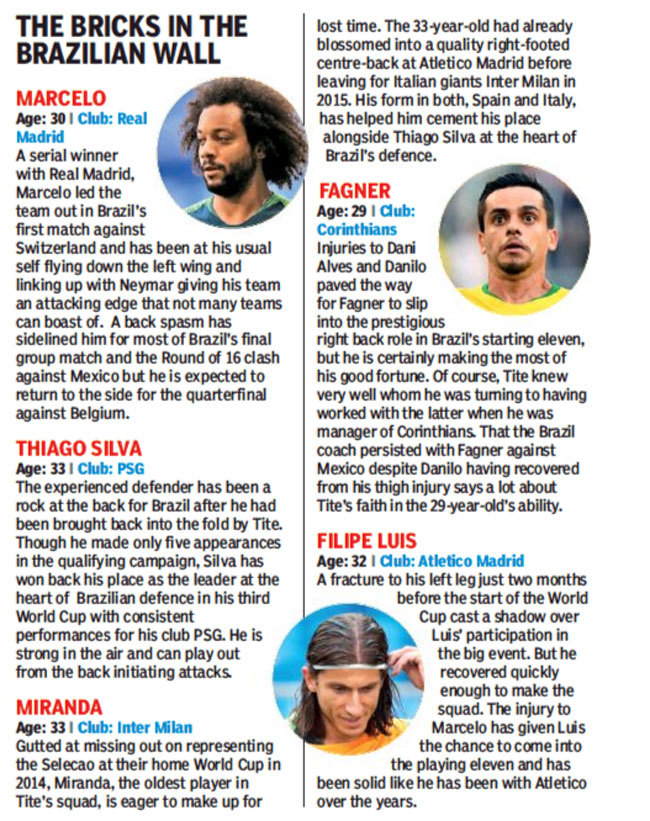