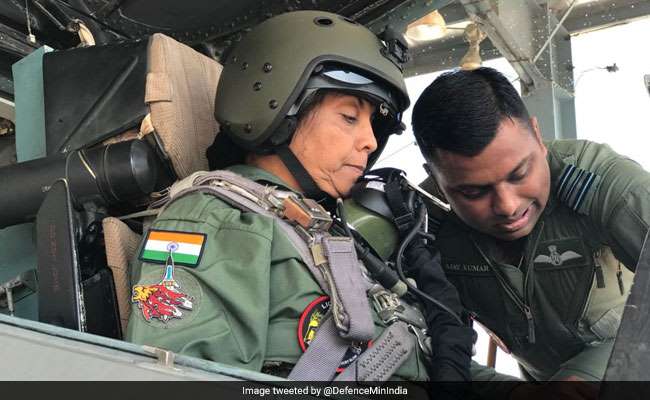 Defence Minister Nirmala Sitharaman strapped herself into a G-suit today and became the second Indian woman leader to go on a sortie on a Sukhoi 30 fighter jet. The supersonic jet took off from Jodhpur Air Force station this morning. As India’s first woman defence minister, Ms Sitharaman has spent a lot of time travelling to Army, Air Force and Navy bases to understand their operations. A few days ago, she was onboard the aircraft carrier INS Vikramaditya in the Arabian sea to witness the operations of the MiG-29 fighter off the deck of the ship and other Naval exercises.

For her sortie, Ms Sitharaman wore a flight overall and a G-Suit, which ensures comfort when the jet takes tight turns. She also wore a helmet with an oxygen mask.

The Sukhoi-30 MKI has nuclear strike capability and can penetrate deep in enemy territory.

The twin-jet fighter was developed by Russia’s Sukhoi and built by Hindustan Aeronautics Limited for the Indian Air Force.