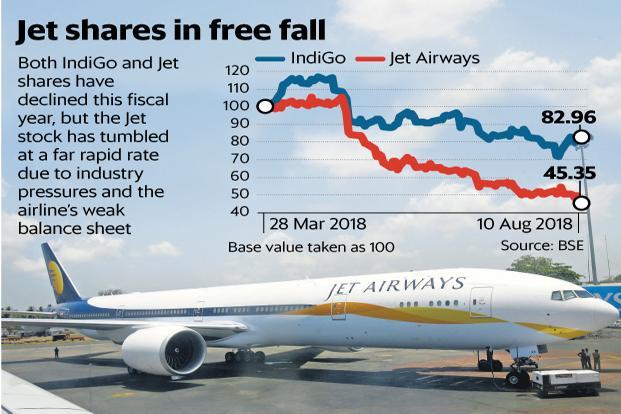 Both and IndiGo and Jet Airways shares have declined this fiscal year, but the latter’s stock has tumbled at a far rapid rate due to industry pressure and the airline’s weak balance sheet. Graphic: Mint

Mumbai: Jet Airways (India) Ltd’s investors are bracing themselves for a hard landing. Some of them will wait until the airline announces the June quarter (Q1) results (deferred last Thursday), before throwing in the towel. But given that the shares touched a 52-week low on Friday, investors may already be ditching the stock. Jet Airways hasn’t disclosed the timing of the Q1 results announcement yet. It has said that management and auditors needed more time to finalize the accounts, and the audit committee has agreed to that.

Of course, expectations from Jet Airways Q1 results are anyway at a low ebb. Jet Airways reported a massive loss of ₹1,036 crore in the three months ended March. It will likely report much higher losses in the June quarter, reckoned analysts from Kotak Institutional Equities in a 6 August report.

After reporting an operating loss in the March quarter, Jet Airways would be hard-pressed for cash, as the operating environment has turned more hostile in financial year 2019, said analysts from SBICAP Securities Ltd in a report on 3 August.

Besides, Jet Airways’s balance sheet is not in good shape. As on 31 March, the company’s negative net worth was more than ₹ 7,000 crore. Cash and cash equivalents were ₹321 crore and other bank balances were ₹ 1,044 crore. High debt on the books results in high finance costs for Jet. In FY18, interest costs were as high as ₹ 843 crore, eating into its profits substantially, what with Jet Airways reporting a loss of ₹ 767 crore. Apart from higher fuel costs, Jet Airways’s international operations have also been suffering for sometime now.

In fact, the entire aviation sector is having a rough time this year. Crude prices remain painfully high, the rupee has depreciated and ticket fares are not increasing as much.

It’s worth noting that even India’s most profitable airline, IndiGo, saw profits crash-land in the June quarter, thanks to higher fuel costs and pricing pressures. IndiGo is run by InterGlobe Aviation Ltd and is India’s largest airline.

“Clearly, with industry load factors in the high 80s or 90s, the industry is turning away passenger demand at current fare levels, but we have no choice but to keep our fares competitive,” said the IndiGo management in its June quarter earnings conference call.

In this scenario, what hope is there for Jet Airways with its weak balance sheet and muted profits?

According to Kotak, Jet’s net debt-to-Ebitdar ratio (based on FY18 Ebitdar and capitalization of lease rentals at 7 times) works out to 9 times. Ebitdar is earnings before interest, tax, depreciation, amortization and restructuring or rent costs; a key profitability metric for airlines. The net debt-to-Ebitdar ratio is a measure of leverage and expresses how many years’ Ebitdar would be required to pay off all debt and operating leases.

Of course, fiscal 2018 was challenging for Jet Airways, with its March quarter Ebitdar being negative.

Efforts to retire some of its high-cost debt through any strategic investment with further equity infusion will be key to bolster the balance sheet and earn collateral benefits, said SBICAP analysts in another report on 26 July.

In FY14, Jet Airways had received ₹ 2,058 crore for a 24% equity stake in the company from Etihad Airways PJSC. Back then, the funds brought reasonable comfort, especially because it was followed by a period of lower crude oil prices, which boosted profits of all airlines.

What of the stock? Jet Airways shares have lagged substantially so far this year.

The deferment of Q1 results comes at a time when news reports are talking about the airline’s financial stress every other day.

On Friday, its shares eventually closed more than 8% lower. Needless to say, the June quarter results will be the key event to watch out for in the near future.

However, over the medium term, considering the high fuel costs environment and pricing pressure, and Jet Airways’s delicate financial position, it is possible that the bottom is yet to come for the company’s shares.